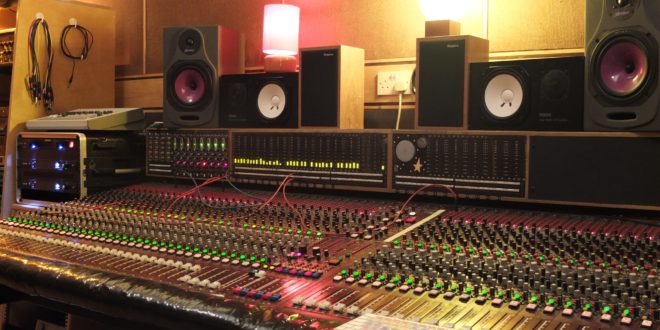 Legendary German engineer and producer Conny Plank was the man behind the desk for recordings by Kraftwerk, the Eurythmics, Killing Joke, Devo, Brian Eno, Ultravox, DAF, Gianna Nannini and countless others. Here, his son Stephan Plank and producer David M. Allen tell Daniel Dylan Wray about the legacy he left behind, including the custom desk he built which is now in London’s Studio 7.

This is what makes Conny Plank’s custom-built mixing desk unique, as told by Laurence Loveless, Studio 7:

"You can learn a lot about Conny Plank by looking at his desk. He simply didn’t see any limits to anything he did and he went to unbelievable lengths to make the desk, customising every aspect of it. The desk is a one-off, totally unique, designed by Conny himself using components he relentlessly tested and upgraded – a process that went on from the desk’s conception in 1970 till his death. It is hand laminated in wood from a cherry tree from his own garden.

"The custom made EQ section has been designed and modified so the circuitry changes characteristic as the cut/boost control is swept through the centre position in order to assign Conny’s own pre-specified frequency settings separately to boost and cut. Most desks run each channel from a 48v power source in order to incorporate phantom power but Conny made a power supply that split the phantom power into its own section and then ran the power rail down to 35v meaning that the desk runs hotter than other consoles.

"This gives the console an incredibly warm tone and a totally unique sound. Its size was carefully designed to fit Conny’s wingspan so he could reach all of the faders without moving his chair from a central position between the monitors. It also has a unique patch bay incorporated into the desk’s meter bridge so that Conny could patch in any hardware in seconds without moving from his central position.

"One section of the desk was designed to split away from the main desk and be installed into his customised recording van so he could drive it out and record on location. There is even a recording Conny made when Duke Ellington stopped by Cologne to rehearse with his band. Conny turned up in the van and he agreed to let him record the session. He did a lot of remote recording like this – it was instrumental to records like Autobahn by Kraftwerk."

Previous Capitol Studios to launch online mixing, mastering and vinyl-cutting services
Next Spatial Audio and Audio for VR to be explored in AES Milan immersive presentations and experiences