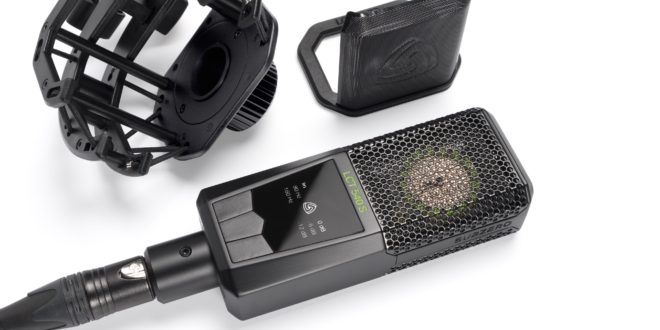 My first experience of Austrian microphone designers, Lewitt, was nearly a year ago when I reviewed their innovative dual output LCT 640 TS condenser. I was very impressed with the next-gen design, quality engineering and remarkable results for such a reasonable cost, making it a real option in a crowded market.

Founder and CEO Roman Perschon’s latest creation, the LCT 540 Subzero (LCT 540 S in Europe and UK), follows in similar steps to their LCT 640 TS in terms of unimpeachable build quality, zinc die cast enclosure and full feature set of supplied accessories. But whereas the 640 TS benefits from the flexibility of the infinitely adjustable polar pattern, the 540 Subzero has been created with a fixed cardioid 1” capsule and just one diaphragm, meaning you’d need to buy two of them (with Lewitt’s Perfect Match Tecnology) to achieve stereo recordings. So why might you want to add the 540 S to your list? Well, the clue is in its full name; the LCT 540 Subzero!

It can be all too easy to get caught up in marketing ‘mumbo-jumbo’ and Lewitt are no exception to the rule when it comes to the LCT 540 Subzero, as their main headliner for this mic is ‘Better Than Human Hearing’.

They claim that “comparing the hearing threshold to the self-noise values of the LCT 540 Subzero, you can clearly see that our microphone is always below the threshold of hearing”. I’m not sure about you but when I read claims like this I can be a little dubious, after all, how can we prove it? In fact, Lewitt built a unique measurement device weighing in at over 4,500KG (around the same as two large modern 4×4 cars). This “heavily dampens frequencies up to a 1/10,000th of their sound pressure. The whole frequency range of a microphone from 20 Hz to 20,000 Hz is dampened by 60 dB, up to 80 dB on the higher frequencies.” All rather impressive, but these kind of technical figures can become a little overwhelming for some and perhaps can detract from what is really important – how does it actually sound – this low self-noise and yet highly sensitive newcomer?

Opening the bomb-proof Pelican case, you are presented with a neatly set-out, well protected set of compartments which house Lewitt’s own structure-borne shock-mount, their innovative magnetic pop-filter, a foam filter and of course the 540 S.  The mic employs, as with others in the Lewitt range, silently operated, flush buttons on the face of the mic with corresponding white and red LED lights to clearly indicate set up choice for low cut filters, pre attenuations, clipping evidence and history.

My first test was to see, in real world terms, if the claimed low self-noise was just marketing hype or a noticeable and usable factor. Using a simple signal generator in the booth, I matched the gain of the 540 S, Lewitt’s very own LCT 640 TS and a benchmark mic we all know rather well, the Neumann U87ai. Without feeling the need to quote figures, I found the 540’s noise floor exceptionally quiet indeed, so quiet in fact that the U87 felt particularly loud in this test with the 640 TS sitting somewhere in the middle of the two. Obviously this was all subject to the room, the pre-amp and converters being used but the differences were relatively huge, and I was confident of my results. All very impressive, but what does this mean in the everyday studio application and does it all matter? Put simply, yes, because this gives us a blank canvas to work from. This mic offers new possibilities when recording as noise issues only really arise during the mixing stage, when compression is applied. As we all have experienced, the mixing process boosts previously inaudible noise, which can cloud a delicate vocal line, or a sustained acoustic guitar note at the end of a song. All this is far less of an issue with the 540 S, even when capturing the most delicate of sound sources.

The second test was using the microphone for a voiceover, this particular project was for an audio book with no underscore. My first impression was how rich and natural this mic sounded on quiet vocals, the sound was strong, full bodied in tone without being clinical, reflecting the meticulous build quality we’re coming to expect from Lewitt.

Next was an acoustic guitar (my favoured approach to this is mid-side but for this test I used just the 540 S on it’s own). Again, the sound was very natural, but the detail for a large diaphragm was impressive whilst retaining warmth that very few mics can achieve with this level of clarity.

We recorded several other sources, all with very positive results, including a floor tom played by a rather enthusiastic young player. There were no concerns about SPL (max on this mic is 136). The tone was big and rich with a good bit of top end snap.

Overall its technical ability is sublime; it sounds warm, clear (yet not clinical), smooth and dynamic. I would look forward to further using a pair for a live classical recording – lessening the need for noise reduction tools in the mix stage.

Thank you to Lewitt for pushing innovations and setting new benchmarks for microphone manufacturing. For the price point of £629.00 this is a brilliant achievement, so much so that the bigger, well established players need to pay attention. I wish Lewitt all the best and cannot wait to see what they come up with next!

Previous Blue Planet II: Creating an epic soundtrack with Hans Zimmer and Radiohead
Next The 2018 Grammy Awards were powered by a JBL VTX Series audio system