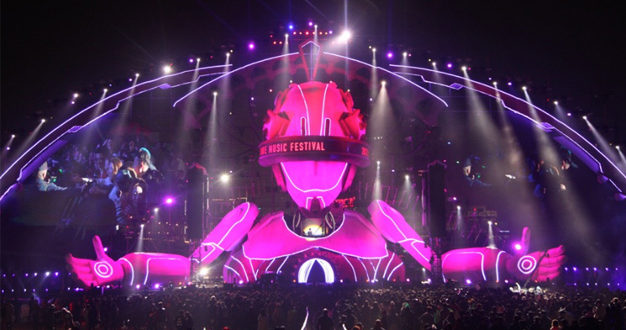 Over 100 Adamson loudspeakers were used at the Mr. Future Music Festival in China, attracting nearly 40,000 fans to Wuhan’s Tunkou Stadium from 18-19 November 2017.

The system included main reinforcement from arrays of 15 Adamson E15 three-way, true line source enclosures per side. Because the stage design didn’t include hanging points, two speaker towers were custom-designed to suspend the arrays. Adamson’s compact S10 two-way, full range cabinets were deployed as both side fills, in arrays of 12 enclosures per side, and front fills, lining the lip of the stage.

For low end, 16 Adamson E219 subwoofers per side were flown behind the main arrays with an additional 18 E219s and 12 T21s groundstacked for additional support.

“The system sounded absolutely explosive,” said Mr. ShaoHua, lead sound engineer for the Mr. Future festival. “Hip-hop and EDM is very bass-heavy, and the Adamson system delivers clear, powerful low-end like no other. We used Adamson’s Blueprint AV software for the precise calculations of coverage, directivity, and SPL distribution across the stadium. We just loaded the presets and settings into the amplifiers and the sound throughout the stadium was consistent from the front to the back of the crowd, meaning every single person had the same high-impact experience.”

Added Real Music owner Zhen “Richie” Wang: “We’re very proud of the way Adamson has grown in the Chinese market. Its use at major events like Mr. Future has only generated more confidence and interest in the brand from our pro audio community, and we look forward to supplying and supporting an expanding number of clients in 2018 and beyond.”