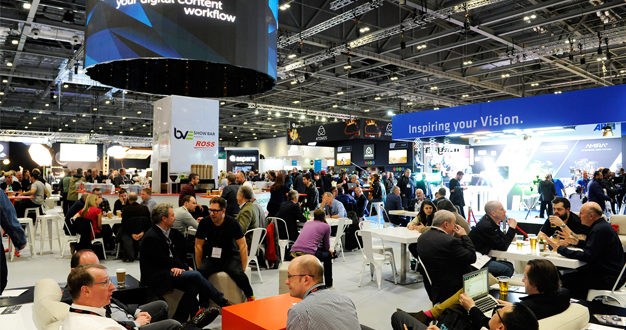 With over 300 brands showcasing their latest products and solutions and over 200 experts delivering content in six dedicated, free-to-attend theatres, BVE looks set to fully delve into this year’s theme of We Are All Creators…

In 2018, BVE is placing a greater emphasis on being inventive, resourceful, and overall more creative. Six new theatres will provide visitors with the opportunity to explore the content they are interested in, whilst also expanding the show’s offering.

“This year BVE has evolved from a purely technical strength to look at what goes into AV and live from a variety of angles, including the creative standpoint, the workflow technicalities and the editing and demonstration of the impact of audio – a first for BVE,” says event manager Daniel Sacchelli.

One of the highlights of the Craft of Capture seminar programme – newly created this year to showcase cinematography, lighting and audio techniques – will be the VR The Champions seminar, during which VR film director Jannicke Mikkleson will talk about creating an immersive experience for Queen’s stage shows.

“BVE will also have a theatre dedicated to the art of post-production called Post in Practice, which will take a practical look at the newest techniques in this discipline,” adds Sacchelli.

Abesh Thakur, production manager for Audio 360 at Facebook, will host a session that explores some of the basics of spatial audio mixing for headphones, applicable to linear 360 video and VR content utilising the Facebook 360 Spatial Workstation plugins.

He will also be talking on the Techflow Futures stage with Rob France, product manager at Dolby, about a plethora of subjects, including insights into new spatial tools. The seminar will focus on topics including efficiencies in audio content workflow, such as object based audio, play out for multiple devices, practical implementation and immersive audio for VR, AR and MR.

“This is the first time that Dolby Atmos will be set up in a live environment, which will give visitors the chance to see the sophistication of the whole system,” explains Sacchelli (pictured above). Meanwhile, Tim Hoogenakker, re-recording mixer, Formosa Group will explore the Dolby Atmos mix and demonstrate how to work with the latest audio innovations.

Pro Audio supplier HHB Communications are bringing the latest technology in the broadcasting, production and post-production sectors to BVE 2018. Located at stand K45, HHB will be offering a look into several current and growing trends including Dolby Atmos and Audio over IP, covering their impact on the post and live sport industry.

RTW is branching out into audio monitoring over IP with the PD-Dante from Nixer Pro Audio, offering 64 channels available to customise, tailor, define or recall via the capacitive touchscreen and listen to them via the on-board loudspeakers and headphone connector.

Audinate’s Dante Domain Manager (DDM) delivers the interface and tools needed to control, secure and monitor all IP devices from one source, regardless of the size or layout. The license will be available to sample at BVE 2018 and is available to purchase in three different editions to suit specific networking demands. The new software will be showcased alongside Dante DVS, Controller and Via.

The 8430A IP SAM Studio Monitor from Genelec will also be on display. Combined with the new GLM 3.0 speaker calibration system, Genelec’s sound is made available to any IP workflow with this Smart Active Monitor.

Other AoIP focused brands that will be appearing are Amphenol, Focusrite and NTP.

Meanwhile, a Dolby Atmos workflow will be shown on the HHB stand via a Pro Tools HD setup featuring the Avid Dock, S3, S6 and MTRX. A range of products will be available here including the HE-RMU with Dolby Atmos Mastering Suite, and new to BVE, the DP590 and DP591 Object Authoring Tool and Atmos Audio Encoder.

Other brands embracing immersive audio at this year’s show will include SoundField, Blue Ripple and Zoom.

With HHB recently appointed a distributor for UK and Ireland, Studer will also be present on the stand showing its Vista 1 and Infinity Series consoles, along with its more compact options such as the Glacier and Micro Series for broadcast, live and production applications.

Additionally, broadcast audio distributor Aspen Media will present AVATUS, the new sound desk from its German supplier Stage Tec, at BVE 2018. AVATUS is an IP-based modular audio mixing console designed for broadcast, theatre and live sound applications. The desk is available with between 12 and 96 channel strips and can provide over 800 input channels and 128 sum buses in formats ranging from mono to 7.1. It is also directly compatible with all major audio networking protocols, including AES67, Ravenna and Dante.

Previous Video: Supporters of Olga FitzRoy’s Parental Pay Equality campaign gathered outside Parliament
Next Recording equipment from former Tears For Fears studio to be sold off at auction