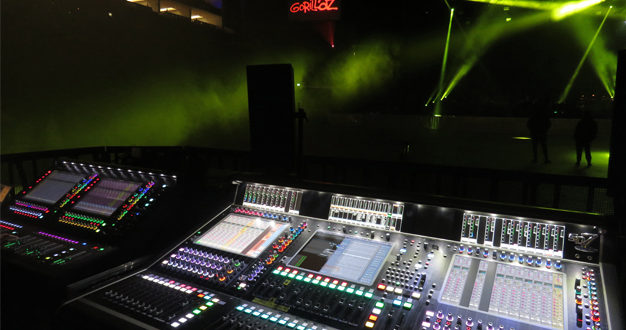 Our weekly Top Ten roundup includes lots of feature content such as Stephen Bennett’s review of Cubase 9.5 and an interview with sound recordist Nicholas O’Brien about extreme location recording, along with news about Sound Devices’ acquisition of wireless manufacturer Audio Ltd. and Gorillaz’ use of DiGiCo consoles for their recent live shows (pictured).

The most read stories of the week however were Alistair McGhee’s breakdown of the location recording market and an article from Shure’s Tuomo Tolonen about preparing for the 700MHz clearance.

See below for the full rundown…

1. What’s happening to 700MHz and how can you prepare?

Shure Pro Audio Group manager Tuomo Tolonen tells Audio Media International how users of wireless equipment can prepare ahead of the 700MHz clearance currently being rolled out across the United Kingdom.

2. Feature: Inside the world of Location Recorders

New and exciting stuff is happening in every area of the pro audio industry and nowhere is that more true than in the world of location recorders. Here, Alistair McGhee reports on the latest developments from the field…

The studio, carved into the mountains of Minas Gerais, was a joint design project between João Diniz architects and Renato Cipriano of WSDG that has taken around two years to complete.

Now a wholly-owned subsidiary of Sound Devices, Audio Ltd will continue to operate out of its Watford, UK offices with Kishore Patel and Lee Stone continuing as managing director and technical director, respectively.

6. Gorillaz hit the road with DiGiCo

7. King of the Hill: Recording audio on location for Himalayas to Ocean

We interviewed sound recordist Nicholas O’Brien about recording audio on location for Himalayas to Ocean, a programme about climate change, which involved a month-long trek through the Himalayas in Nepal…

New products from co-exhibitors Avid, BroaMan, Nugen Audio, RTW, Studer, Wohler, Yellowtec and Zoom will be on display on HHB’s stand at ExCel London in a couple of weeks time.

The Women’s Audio Mission (WAM) is a San Francisco/Oakland-based nonprofit dedicated to advancing women in music production and the recording arts.

10. Matt Napier on mixing monitors for Roger Waters’ Us + Them tour

Matt Napier knows better than anyone the trials and tribulations of touring. In the last five years alone, he has mixed monitors for Leona Lewis, Michael Bublé, Madonna’s Rebel Heart Tour, and most recently, the North American leg of Roger Waters&rrsquo; Us + Them tour, which hits Europe, Australasia and South America this year…