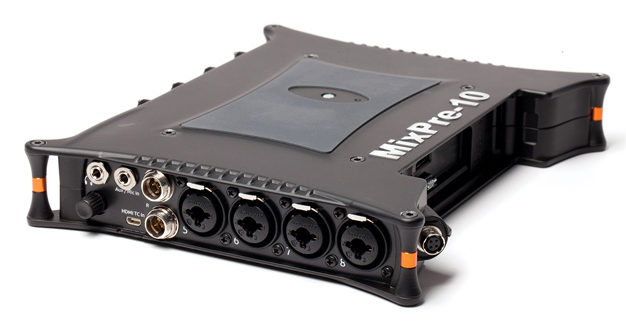 When on location or in audio-sensitive environments, sound designers and field recordists usually require the most compact solutions for the biggest jobs.

Here, we speak to a number of professionals who have recently got to grips with some of the latest, most versatile offerings to find out how they use their features for capturing audio on the move.

Sound designer and field recordist Watson Wu was recently hired to work on a Mercedes Benz commercial, whereby he was tasked to rig multiple microphones on and around a high-speed vehicle. Despite already owning a number of devices, Wu wanted to purchase another high-input field recorder to capture more onboard and external channels all at the same time.

“When the new recorder arrived, I only had one day to learn how to use it prior to the Mercedes-AMG job, but this little guy was easy to use,” says Wu. “I was quite pleased to be able to link inputs 1 through 4 and just turn knob #1 to change the overall gain when we used an Ambisonic mic, while I also like recording with MS stereo linking.”

Since then, Wu has successfully captured a 1926 Ford Trimotor plane for a Ford Museum Exhibit and weapon sounds for a yet to be announced project. He is a fan of the MixPre-10T’s small footprint and light weight along with its dual powering options, top joystick transport buttons and clean mic preamps.

The Olympus LS-P1 and LS-P2 are both part of the company’s new LS Pocket Series, designed for recording anything from a band’s jam sessions to podcasts as well as audio for videos and interviews.

The LS Pockets claim to be one of the smallest hi-res audio recorders ever made at just under 15cm tall and less than 1.8cm thick. Directional microphone systems ensure recordings in broadcast quality Linear PCM 96kHZ/24bit format.

The LS-P2 incorporates a TRESMIC, 3-microphone system for expanded frequency response with better bass capture (20hz to 20,000hz) and also allows the results to be sent to external speakers via Bluetooth. It also includes a Normalisation function, enabling the levels of recorded files to be subsequently boosted to the optimal distortion-free maximum volume – without the need for any PC or additional software.

Jerry Ibbotson, who worked as a BBC radio journalist, sound designer, and more recently a freelance audio producer, believes that what all the LS models have in common is recording quality, great build, and ease of use.

“A real bug-bear with small recorders is pre-amp hiss,” says Ibbotson. “But the LS-P1 and -P2 give clean, clear sound and they’re also dead easy to use, with menu layers kept to a minimum.

“I’ve used them in radio reporting, sound effects acquisition and even to record a psychic ‘reading’. The results are far better than you might expect from such small devices and they just ooze quality. They’re a worthy addition to any audio person’s arsenal.”

With four XLR/TRS combo inputs, a 3.5mm stereo input, and a Zoom mic capsule input, the F4 multi-track field recorder can record up to six discrete tracks with an additional stereo mix track—all at resolutions up to 24-bit/192 kHz.

Alistair McGhee was an audio engineer for the BBC before moving to radio and TV production, and is well versed with Zoom’s field recorders and audio interfaces.

"The tape return input on the F4, which can handle -10 or +4, is selectable to inputs five and six, and when used this way hitting the input 5/6 custom button the front panel sends a prefade listen of the tape return to the headphones,” McGhee explains. “Very convenient – but at the small cost of recording tracks 5 and 6.”

“As an extra safety feature the recorder closes the record files at regular intervals and so should disaster strike you will not lose the whole file,” adds McGhee, who recently used the F4 in his workflow. “I tried pulling the card out of the recorder while in the middle of a take and I lost about ten seconds of audio; the rest of the file was completely intact and usable."

The DR-10L is an ultra-compact digital recorder/lavalier microphone combination. Designed for filmmakers and videographers, it is a solution that provides sonics in a convenient form factor. For location recording, a DR-10L can be mounted to each on-camera actor, making booms, wires or expensive wireless systems unnecessary. The DR-10L is also a handy tool for experimental audio designers thanks to its portability and its tiny, professional spec microphone.

Andy Napthine of Napthine Porter Marketing has used the DR-10L many times when recording corporate and YouTube videos, and finds it to be a very versatile mic/recorder package.

“It is light in weight and discrete in use, and has never let us down,” says Napthine. “I particularly like the dual recording modes and limiter feature, which records the content at two levels – one lower than the main input. This has helped us out a few times when recording outdoors on site. It is very easy to use and the overall build quality and reliability is outstanding – it is excellent value for money and a unit that I would highly recommend.”