Home / Interview / King of the Hill: Recording audio on location for Himalayas to Ocean 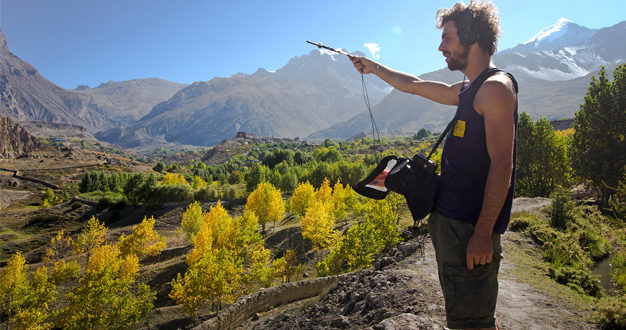 King of the Hill: Recording audio on location for Himalayas to Ocean

We interviewed sound recordist Nicholas O’Brien about recording audio on location for Himalayas to Ocean, a programme about climate change, which involved a month-long trek through the Himalayas in Nepal…

“I got into sound in my teens, playing in bands in my French hometown and dreaming about how to record the (probably terrible) noise we made, just like our favourite artists,” says location sound recordist Nicholas O’Brien.

He says he started tinkering with any machine or software he could get his hands on, trying to find creative ways to mic his band up, such as using old speakers as microphones.

“It sounded terrible,” he jokes. “A school project researching the effect of music on the brain made my mind up, and I went off to study sound engineering in England.

O’Brien says that his first job was as an audio supervisor but because he didn’t enjoy sitting still, he set up his own project cycling around Europe to record musicians along the way, called Record and Ride.

“The project took me across 10 different countries and I met over 53 artists. After five months on the road, I was certain I didn’t want to be a sound engineer stuck in the same studio all week.”

Since then O’Brien says that he’s tried to keep his work varied having worked in radio, theatre, live and studio music, documentary and feature films and is currently setting up a production company and mini-label called Upcycled Sounds. One of his most recent projects involved a month-long trek to record sound in the Himalayas for a programme about climate change. Here, he tells about the callenges of recording in such an unforgiving environment…

How did you get involved in this project?

I grew up in a family that was very conscious about environmental issues and this has always been a big part of my work and life. I think it’s particularly important in arts and the media as they are great vehicles to bring new audiences to these issues and set a good example. Some of the things I do include building kit from reclaimed materials, using solar power and having a professional recording set up that can fit on a bicycle.

With this in mind and following on from the Record and Ride project, I co-founded a three-day music festival that engages new audiences with social and environmental issues, Tandem Festival. In doing so I met one of the founders of the Himalayas to Ocean project. When she told me about the project, I immediately said I’d love to join. Over the course of a year and a bit, the team slowly grew and we all mucked in to shape the project. The final team consisted of three graduates of the Oxford University School of Geography (Alice Chautard, Yolanda Clatworthy and Justin Falcone) who worked on the research, photography and writing, a videographer (Ross Harrison) and myself on sound.

Tell us about the brief for the project?

Our goal was to explore the human story of change, resilience and adaptation in one of the regions most heavily impacted by climate change in the world – the Gandaki River Basin in Nepal. Aiming to showcase the connections between upstream and downstream impacts, we split the journey up into three main sections: Flood plains, hills and mountains.

The brief was to take this grand aim and collect compelling stories of local people directly affected by climate change. We had various contacts and some fantastic partner organisations on the ground but before the trip we had no idea what these stories might be. We wanted to meet people, develop a strong relationship with them and get to the heart of their experience of change -all this within a month. It was ambitious but we came home with great material and a lot of adventures to share.

What were some of the biggest challenges, in terms of capturing sounds in that environment, managing power, etc?

I always find the biggest challenge is isolating the sound you want – even in a small team it’s hard to make sure everyone is quiet whilst recording. Luckily our route had no planes and barely any traffic, but to get clear recordings I would generally wander off or lag behind the group. I had to be very efficient with recording though, as I couldn’t separate myself far from the group – too many landslides and unclear paths!

Another challenge was having quick access to my gear when it’s in my backpack. I couldn’t dangle my recorder round my neck for hours just in case an amazing sound happened! I solved this by packing my sound recorder at the top and keeping my DPA d:heavyduty 4060s plugged in, attached to the outside of my bag on a stereo bar I made from a tent pole. If I heard a great sound with no unpacking time, I could just pull out my phone and record with my Zoom F-8 via Bluetooth. This also came in handy when I didn’t want to disturb a village soundscape by bringing attention to my mics.

Another issue was how to capture a heartfelt recording without overwhelming the interviewee with gear. We reduced the number of us present during interviews to a minimum. I used radio packs for my DPA mics and so that I could attach them to the interviewee and then sit far back to monitor. This meant that once they’d eased into the interview they didn’t have me staring at them and waving a boom pole around their head. For the more ad-hock interviews I’d quickly attach another DPA d:screet Heavy Duty 4060 to a tent pole and sort of boom with that. Not perfect but it worked, was a lot less invasive than a shotgun-mic in a big windshield and most importantly was very lightweight.

Finally, humidity was a bit of a problem at times. Either it was hot and humid or we’d get stuck in intense bursts of monsoon rain. I had dry-bags for everything but hadn’t anticipated the problem of getting rid of humidity once in the gear bag. Luckily the videographer had more experience of these kinds of environments and lent me a bunch of silica-gel bags. Nothing got damaged as a result of humidity but I did learn something very useful!

The pre-amps are pretty clean, it’s very easy to navigate, has most of the features you would find on the more expensive recorders and I ended up using the Bluetooth feature quite a lot. I didn’t bring a mixer to save on weight and managed to do everything on the Zoom F-8, although sometimes the gain knobs felt a bit too and levels were hard to read.

I used these for just about everything. They were great lav-mics but I also used them for recording ambiences, sound effects and put them in all sorts of silly places. As I described earlier, they spent a lot of time dangling off the back of my backpack as a stereo pair on a tent pole (inspired by a Wild Eye nature recording weekend I went to with Chris Watson and Jez Riley French ) and I would also use the tent pole to sort of boom them closer to the sound source when recording trickier sounds.

For a while I had been planning to explore immersive sound recording in the field and in the lead up to the trip I tried a few arrays (I would recommend reading Michael Williams’ work on stereo and multi-channel recording). However, they all involved carrying a lot of extra bits and bobs around. As I was doing my research I was offered the opportunity to try out the DPA d:mention and very quickly realised this had been exactly what I was looking for! It’s very well to spend hours in the studio finetuning your multi-channel array but when you’re out in the field you want everything to be as hassle free as possible. This mic was just perfect and I can’t say that enough. I was able to stand on suspension bridges or in the middle of an active landslide recording in 5.1. Packed away easily in my backpack, within a minute I could be recording six channels of audio.

I used these as windshields for my DPA d:heavyduty and they worked very well. I was able to record in quite windy environments without too much trouble and would definitely recommend these to anyone working outdoors. However I would recommend bringing a hard container to store these in – I ruined a couple by accident in my backpack…!

I brought plenty of these [from Bubblebee Industries] and used them pretty much every day. It was easy to prep the lav-mics and hide them on our interviewees. As I mentioned earlier, one of my big worries was invading the private space of people who aren’t used to having so much kit waved around their face. This set up was so simple that I could do it quickly and efficiently then forget about it and monitor out of everyone’s way.

I brought this as a backup and barely used it. I had it positioned on a stand for each interview in case anything went wrong but I was lucky and nothing did!

I had this for the NTG1. Although I didn’t use the mic much, the couple of times I did in windy conditions the Spacer Bubble did its job well. A lot less cumbersome than a big windshield, it saved be a lot space only in exchange for a slight loss in high frequency content – a small price I was more than willing to pay!

I always bring at least one of these for any outdoor recording. They’re so light and pack down so easily compared to normal mic stands. I used one for the DPA d:mention and could leave it confidently standing in quite windy conditions as the legs stretch out pretty far giving it a good balance. I probably could have done with just the one… the second one just free-rode across Nepal.

These are just great. Jez Riley French makes them himself and I carry them around everywhere for studio or field recording. These mics are great for capturing unusual sounds and experimenting a bit. My favourite was attaching these to suspension bridges swinging in the wind.

Same as the contact mics, this mic was excellent for your unusual sound and to discover what’s happening underwater. I had a lot of fun trying various things out with this.

I used these everyday and they work very well and were reliable throughout the trip. I was surprised by how efficient they were with energy consumption and I’m glad I didn’t get any interferences (despite checking which frequencies I was allowed to use, I’m always worried I’ve missed something when working in a new country… )

They were great and never had any power problems. Kept on going for a few days on each.

I had a few other bits and bobs but these were the main components of my set-up. I spent a long time thinking about it and as you can probably tell I was very pleased with it. I won’t change much for the next trip.