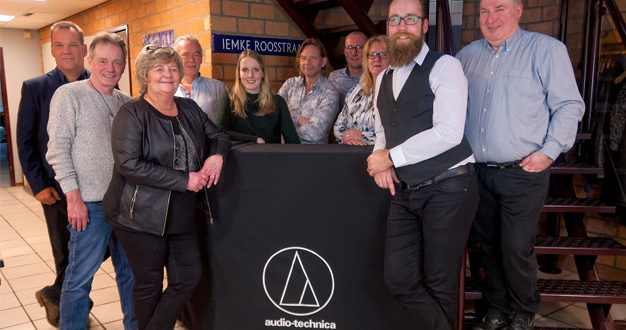 Audio-Technica is presenting the European debut of its new 3000 and 5000 Series frequency-agile true diversity UHF wireless systems on Booth 7-N190 at the ISE Show this week.

The third generation of the company’s 5000 Series wireless systems are designed for use on professional tours, in stadiums, concert halls, festivals, houses of worship and other demanding audio environments. The receiver has been updated with a tuning bandwidth of 230 MHz: 470–700 MHz and users now have the option of selecting a standard receiver with two balanced XLR outputs (ATW-R5220) or a receiver that also includes a Dante output (ATW-R5220DAN).

Other new features include an antenna cascade output that connects up to eight receivers so a single pair of antennas can feed up to 16 channels of wireless, and a backup frequency that can be quickly swapped by pressing the transmitter’s multifunction button in the event of unexpected interference. The updated 5000 Series systems (pictured below) will be available in the summer.

Further to these ISE product debuts, Audio-Technica has announced that its Netherlands-based distributor, Iemke Roos Audio, has been rebranded to “Audio-Technica Benelux”. The Iemke Roos team (main image) headed up by long-serving managing director, Gineke van Urk, will remain unchanged.

One of the longest established pro audio importers in the Netherlands, Iemke Roos has worked with the Audio-Technica Group since July 2014. The naming transition to Audio-Technica Benelux adds to the company’s offices in France, Germany, Spain, Hungary, Dubai and UK.

Robert Morgan-Males, marketing director, Audio-Technica Europe said, “The launch of Audio-Technica Benelux is the result of many years of close collaboration with Iemke Roos and I’m delighted to further strengthen our relationship with the Netherlands and Belgium-based team.”