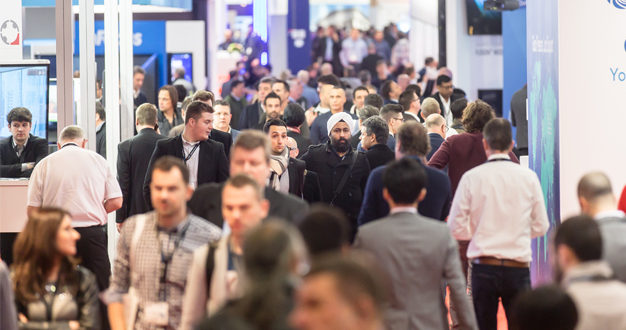 This year, leading international companies, new product launches and senior technical and marketing personnel from a range of complimentary technology sectors will once again gather under one roof for four days of what ISE managing director Mike Blackman describes as “the de facto AV systems integration business.”

Audio is playing an increasingly vital role in numerous areas of technology on display at the 2018 event, from its use alongside digital displays in the retail marketplace to the latest boardroom unified communications systems.

“I think that an enduring factor in the show’s long-term appeal is the fact that we are always keen to innovate and embrace new market sectors that we feel are relevant to the broader AV market,” says Blackman. “Recently this includes areas such as education technology, smart building and virtual/augmented reality.”

While its role in ‘smart’ communications cannot be underestimated, “ISE provides the opportunity for attendees to get a holistic snapshot of audio technology and solutions developed for use in the whole market rather than a single, niche area,” Blackman explains.

Primarily, attendees can expect to see the latest audio systems, acoustics, interpretation and processing technologies being showcased by leading manufacturers and service providers, while exhibitors will have the opportunity to connect with a mix of AV ‘channel’ professionals (over 60% cite audio as being part of their business) and end users from a wide range of markets including education, corporate, healthcare and finance.

This year, ISE has consolidated lighting, audio and staging exhibitors into one dedicated area called Audio and Live Events Technology in Hall 7. This had previously been called the Audio Hall, focusing solely on pro audio product manufacturers.

“I believe that we will see more widespread integration of audio networks with IT network infrastructures,” adds Blackman (pictured above). “The competition to establish a networked audio standard will become clearer as the two main players vie for industry acceptance. Plus, I think that the focus for audio manufacturers will increasingly be on new applications, aesthetics and the ease of installation and use.”

In the year of Alcons Audio’s 15th anniversary, ISE 2018 sees the return of the popular Pro-Ribbon Immersive Experience, for which the company will again be teaming up with Astro Spatial Audio (ASA) for pro installation applications. Here, an audio system based around a hybrid 9.X.8 immersive surround configuration will be used to reproduce native and upmixed Dolby Atmos, Auro-3D and DTS:X content.

At Hall 15, stand U265 at this year’s show, Powersoft will launch the new Duecanali 804 and Duecanali 4804. The company’s latest offering is a two-channel amplifier platform with optional DSP and Dante dedicated to the fixed install market.

On Booth 2-B50, Sennheiser will be presenting its business solutions portfolio, focusing on the topic of digital workflows. The audio specialist will showcase the latest version of its Control Cockpit software for simpler operation, control and servicing of Sennheiser microphones. The new update adds the ability to fully control other microphone solutions such as the Digital 6000 and the evolution wireless G3 series.

Sennheiser also invites attendees to learn more about key developments in digital communication during a programme of presentations and lectures taking place in the Speaker’s Corner.

Five years on from the release of its HALO-C line array, EM Acoustics is launching HALO Arena for the arena sound reinforcement market (pictured below). Built on the same core design as the much smaller HALO-C, HALO-A takes overall SPL capability to a level suitable for much larger applications including fixed installation, houses of worship, large format touring and corporate AV events.

ISE 2018 will see Meyer Sound exhibit a wide array of its audio technologies, contribute to education through the AVIXA Professional Development Programme, and participate in the 11th annual InAVation Awards.

As well as showing its LEO and LINA systems, The Meyer Sound booth (Hall 1, M-90) will feature a display of products and technologies for installed systems. Making its European trade show debut is the new Ashby line of ceiling loudspeakers featuring the company’s IntelligentDC technology.

Meanwhile, Nexo will present a range of its professional loudspeaker models, including a new series of loudspeakers, stands and mounts designed especially for Nexo by Showem of Germany.

Finally, on 5 February, Audinate’s popular Dante AV Networking World will return to ISE, showcasing the benefits of audio networking for commercial installation. The free event will offer training sessions as well as hands-on product demonstrations from a number of audio brands.