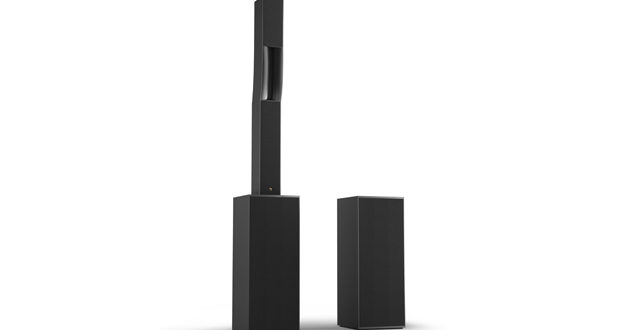 The Syva system currently comprises three elements, the Syva, Syva Low and Syva Sub. In its standard configuration the Syva slots into the Syva Low, which can then be supplemented by the Syva Sub for extended low end coverage. The usual mounting options are available including a rigging bar (for hanging), pole mounting, wall mounting and a base plate for floor mounting.

At first glance it looks much like any other column loudspeaker system but closer inspection reveals a unique and rather pleasing curve to the middle of the column which mimics the J curve utilised by line source systems. What they’ve essentially done is place the individual LF, MF and HF elements of a single line array box into a neat floor standing package that doesn’t require any tricky configuration of individual speaker elements to get it up and running.

The Sub contains one 12” transducer whereas the Low has two (vertically mounted), both are 84.9cm tall and have an AutoConnect socket on the top surrounded by four neodymium magnets into which the Syva column neatly slots (and is held firmly in place). The audio connection comes via a single NL4 speakon connector at the base which provides signal to both units from an LA4X, LA8 or LA12X amplifier. The Low goes down to 40Hz and is capable of delivering levels up to 137 while the Sub goes down to 37Hz with levels up to 128dB.

The Syva is 130.1cm tall and sports four 5” MF transducers above which are three 1.75” compression drivers arranged in the J curved section of the column topped off by two more 5” MF units. This configuration of drivers forms the colinear source which focuses the energy towards the back of the audience while providing down-fill coverage to the front. The directivity pattern is tightly controlled in the vertical plane at just 26° (+5/-21°) with ultra wide horizontal coverage of 140°and an extended throw up to 35 metres. It has a usable bandwidth of 87Hz to 20kHz and is capable of delivering levels up to 137dB.

Various configurations of the three units are possible, for instance one LA4X amplifier could power two columns each comprising a Syva and Syva Low or one column augmented by two Subs or four Syvas. The system that was demonstrated to me was powered by two LA4X amplifiers which drove two columns comprising Syva and Syva Low elements complimented by four Subs. (You can power a column/sub combo from one channel so essentially this would be one column plus three subs.)

We started by listening to pre-recorded music with the subs turned off and I was instantly impressed with a sound that was clear, crisp and punchy. It sounded great straight out of the box and was smooth and even across the whole spectrum, handling various different styles of music equally well. We then turned on the subs and my first impression was that they were a bit superfluous to requirements, adding a modicum of infra sound to bolster the bottom end. But I soon realised they were capable of delivering the kind of deep sub particularly favoured in dance music and the kind of rock that likes to impart the visceral experience of feeling the thud of the kick drum in your chest and thus is able to provide the kind of bottom end not normally heard on a system of this size. The volume of the system was also impressive considering the size, the clarity remained consistent as the level increased as did the coverage. The pattern control was pleasantly even down to about 300Hz and while the room I was in wasn’t large enough to test the throw capabilities, it was quite clear it was capable of delivering wide and even coverage over a relatively large area. In terms of practicality the units are all relatively light, the Low, Sub and Syva are 29, 27 and 21 Kg respectively.

I also tested the stability of the units and found that when fitted with base plates they could be pushed to about 20° before they felt like they would topple, which is quite a serious nudge under any circumstances. The magnets holding the Syva in place on the Syva Low are surprisingly strong, when trying to prise them apart I had to stand on the base plate because it felt like I was going to lift the whole lot up. I would be very wary of placing them on the floor because once you get a few bodies in even the brilliant colinear dispersion is going to struggle to get over the head of the crowd, L-Acoustics themselves recommend that the system be stage mounted.

The additional mounting options coupled with the scalability of the system means you can cover an extremely wide range of applications and the simplicity of connection makes it easy to deploy just about anywhere, I particularly like the idea of using the Syva units as quick and easy balcony fills. L-Acoustics are also keen to stress the elegant and sleek design, back in July they deployed 22 units into various levels of the Louvre in Paris for the Louis Vuitton fashion show. The norm at such events is that you’re asked to hide the speakers but the organisers liked the look of Syva so much they chose to feature the distinctive columns among the white statues and elegant hallways.

When trying to place them in the context of other speaker systems it’s hard to resist the temptation to compare them to the many column systems out there but I don’t feel that’s a fair comparison. L-Acoustics have succeeded in squeezing the capabilities of a compact line array into a column sized package while somehow managing to deliver clarity, volume and dispersion characteristics way beyond its humble size.