Home / Feature / Report: Top FOH engineers on what they look for in a live console 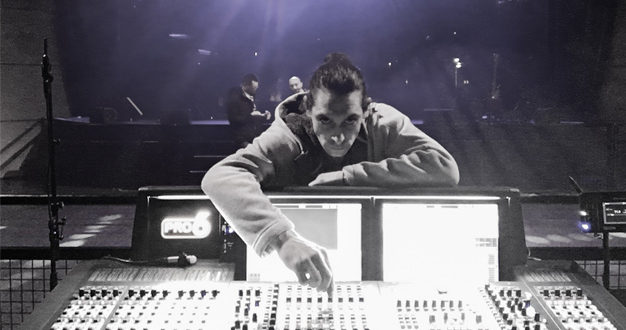 Report: Top FOH engineers on what they look for in a live console

Andy Coules speaks to live sound engineers Laurent Dupuy, Rich Burt, Wes Maebe and Justin Grealy about their opinions on the challenges presented by modern live sound consoles and what they’d like to see with future updates…

When it comes to live sound the mixing console is mission control, grand central station, where the magic happens, the hub of all activity. It’s the place where inputs and outputs collide in a precisely choreographed ballet of cascading audio overseen by engineers adept in responding to multi channel musical performances in real time. So what better way to look at live consoles than speaking to four skilled practitioners in the field of live sound?

When I asked for everyone’s opinion on the current state of the art in live consoles, the dominance of digital consoles quickly become a key topic.

Laurent: “The digital desk has definitely – and I think permanently – sent analogue ones packing! The quality of sound in the digital world has improved so much in the past 10 years that it’s hard to find a good reason to go through the hassle of installing analogue desks. Their small size also encourages a lot of small production companies to take them on tour, when before they were reserved for companies who could afford more staff.”

Burt: “The solidifying of digital consoles as the norm is allowing people to mix with a great level of refinement and control – at pretty much every level from pubs to stadiums.”

Grealy: “There are many good products in the marketplace, particularly in the cheap end of the market. For a few thousand pounds it’s now possible to purchase a very powerful and versatile tool. In the higher end of the market there are some really fantastic bits of kit. I regret, however that I no longer have the choice between digital and analogue as most hire companies neither stock or support large format analogue consoles.”

Maebe (pictured above): “This is a double edged sword really. Everything has gone totally digital, with manufacturers trying to cram more and more features into a smaller footprint. Of course there are positives to this situation, recalls and scene snapshots are amazing tools and the smaller real estate means it’s easier to travel with your touring console. However in my opinion this all comes at a price. Having grown up on analogue consoles, I’m used to mixing dynamically, making small adjustments to a snare on the one hand and riding effects sends on the vocal on the other. On the modern day digital consoles that is virtually impossible. To me it makes mixing live sound a lot more static and a lot less creative.”

So what’s your favourite console?

Maebe: “My all time favourite console has always been the Midas Heritage 3000, it always delivered a fat and punchy sound and is extremely well laid out, making mixing a fun and creative job. In the digital domain I really like the Yamaha CL5. When I was touring with Sting, I got very familiar with the M7CL, but I was never a fan of the mic pre-amps, which meant dragging around a rack full of Summit mic pre-amps. Yamaha listened to its user group and vastly improved the pre-amps on the CL5. Knowing the M7 allowed me to jump right in with the CL5. I also like the CADAC CDC7 – I love the pre-amps and the dual screens which allows you to approach the mixing process a little more analogue style.”

Dupuy: “I really like the Yamaha CL5. It sounds great, it’s very flexible and it’s easily available everywhere for a world tour. Also the Yamaha interface is well designed. Any engineer can start using it and find most of what they want in no time. The sound has improved a lot since the PM5D or M7CL – better pre-amps, better summing, better processing, etc.”

Burt: “I really like the Soundcraft Vi series. They sound marvellous and the layout is super visual and intuitive and they’re the only consoles that come with Lexicons inside.”

Grealy (pictured above): “The Midas Pro series, because they sound great and I know them really well. The design ethos of the Midas boards was historically driven by their vast experience of analogue console manufacture, them being one of the market leaders for over twenty years. I still have a lot of love for the old PM5D too.”

What are the key challenges of modern live sound consoles?

Burt: “With the huge amount of flexibility in most digital desks, it can be a challenge getting your workflow right – and then sticking to it. The many options available become apparent whenever you use other people’s show files. It can be difficult getting your head around their workflow. Another thing is the temptation to over use all the features – just because there are hundreds of compressors and lots of nice plugins doesn’t mean they all need to be used. This can easily distract from the fundamentals of mixing a good show.”

Grealy: “Learning all the different operating systems. Watching the stage and the screen at the same time.”

Maebe: “Allowing the operator to work in an analogue fashion, doing multiple actions at the same time. We’re still dealing with computers/operating systems and those tend to crash. Another key challenge for me is that everything is now visually represented. And even though I try not to look, when there’s a big bright screen screaming in your face in a dark venue, you can’t help but cast a glance. It’s usually a total shock horror moment when you see the graph of the EQ you’re applying. Your knee jerk reaction is, wow that’s way too much cut or boost and then you step back, listen and realise, that’s exactly what’s needed. It’s just one of those digital processes that gets in the way of the ears.”

Dupuy (pictured above): “Apart from the Avid S6L, none of the other desks can handle latency issues. So every time I want to use parallel compression I have to use busses for the main signal and the compressed signal. I end up with a pretty massive routing. For example, on my CL5 routing for Alpha Blondy I have no free busses when only using eight effects. All the other busses are used to avoid latency problems.”

What features would you like to see on future consoles?

Dupuy: “Being a recording and live engineer I would love to be able to use my Universal Audio plug-ins on each desk. That would change my workflow! At the moment most of the desks force you to use a particular set of pre-amp racks from the same brand but hopefully the day will come when Dante protocols will be installed on all racks and we’ll have the choice to pick the remote pre-amp racks you like most.”

Burt: “I’m enjoying SSL’s idea of Stem Channels and the flexibility they provide, allowing groups to be fed into groups would be very useful for drums, it would be great to see something like this on other consoles. I also look forward to better virtual sound-check and recording integration going forward.”

Maebe: “Obviously a lot more compatibility between the various brands. An increase in multi-functionality, as in allowing for more than one or two user actions to take place at the same time. On most mid and even high end digital consoles that are out now, all the faders, encoders and switches just feel cheap and wobbly. It would be nice to feel a sturdy console under my fingers.”