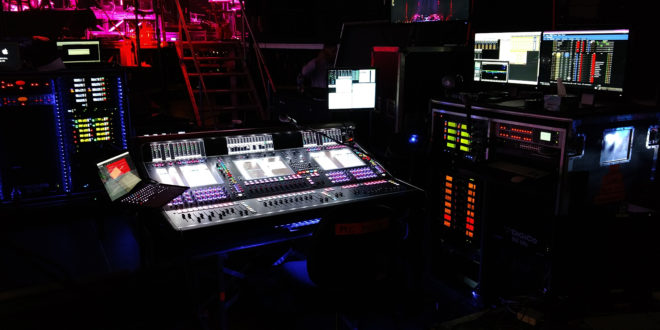 Passenger’s monitor engineer Charlie Bryson has praised the flexibility of the DiGiCo SD10.

"You can start with a blank canvas and set them up to have exactly what you need to see, and have it right in front of you at all times," he said.

“I’ve used a DiGiCo SD10 on monitors for the last year with Passenger, with a short stint on an SD5 for the Australian leg of the tour,” added Bryson.

Bryson has worked with UK rental company Major Tom (which has credits that include Ed Sheeran, Rod Stewart, Maria Carey and Passenger) for the last five years.

“When we first started talking with Major Tom about our specifications for the tour, the SD10 was top of the list for me. I love the overall flexibility of all SD Range consoles.

“This allows me to control and change Mike’s [aka Passenger] mix down to the finest detail without affecting the band at all,” he explained. “I don’t know another console where I’d be able to do that with such ease.”

Said Major Tom’s Andy Banks: “The SD10 one of the most spec’d desks in the world right now. Almost every engineer loves them and they’re impossible to keep in the warehouse. In fact, we could have sent out twice as many as we have. DiGiCo consoles are very reliable and the backup is amazing. It’s by far the best support we get anywhere.”

Previous PreSonus extends Studio-series line with two new USB interfaces
Next Report: Top FOH engineers on what they look for in a live console