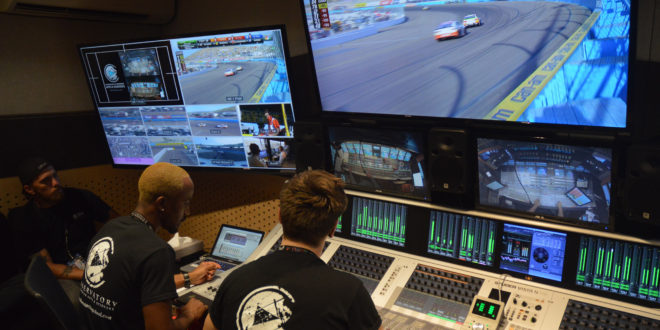 “As sports production continues to evolve, keeping up with new technologies such as Dolby Atmos is very important to deliver content to the audience that can rival cinema audio practices,” explained Denis Ryan, senior audio NBC, NBCSN NASCAR, ABC/ESPN Indycar. “Consumers expect to hear the same quality of sound from a live production that they hear in theaters.”

Robert Brock, director of Digital Department, CRAS, who was on-site training the students during the NASCAR event in Phoenix, stated: “While we were out at PIR, we also deployed a Sennheiser AMBEO® microphone at the start/finish line. It was specifically used to feed the Dolby Atmos® overhead speaker positions. It really brought the audio alive. Our students were amazed at the sonic quality both the Dolby Atmos and AMBEO mic brought to the production."

Added CRAS administrator Kirt Hamm: “Our students received the raw feed from NBC. The feeds included all the behind-the-scenes audio discussions and directions between the directors, broadcast crews, producers, engineers, and videographers. With all the background streaming in simultaneously, our students had the opportunity to experience what a broadcast is really like and to practice mixing the audio and follow directions amid the chaos of a live broadcast. This opportunity was devised in an effort to boost potential careers in broadcast audio in a real-world setting.”