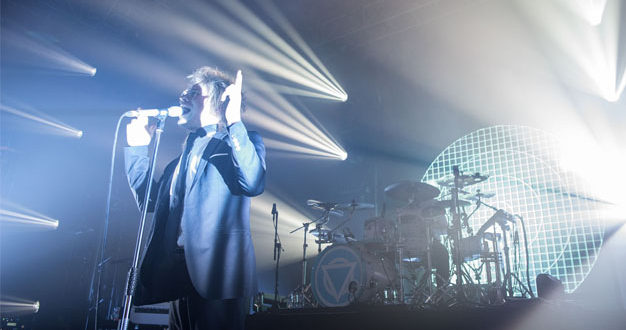 Enter Shikari – known for their hardcore industrial punk and heavy metal electrobeats – used a new quadrophonic system from Coda Audio, and supplied by Adlib, for their latest tour.

During the initial stages of the tour’s design, Andy Russell (FOH) wanted to specify a system that would push the boundaries in audio fidelity. Adlib’s systems engineers all recommended Coda AiRAY as the perfect option.

Russell, who has worked with Enter Shikari for the last 11 years, was initially inspired to go down the quad route by Roger Waters’ ‘Dark Side of the Moon’ surround sound performance at Coachella in 2008. It was a technique they utilised on the last arena tour (Feb 2016) which was also serviced and engineered by Adlib. However, for this tour, a much bolder quad approach was adopted.

Numerous effects from Shikari’s new album ‘The Spark’ were automated, so they could be bounced around the room, bringing a truly immersive experience to the fans. The Coda system proved to be ideal for the band’s vast collection of dynamic and immersive effects that thrive outside traditional spectral limits.

The typical system comprised of a 12-deep AiRAY hang per side with 4x ViRAY as downfill. Flown behind the AiRAY were typically 6x SC2 LF extensions per side. These double 15” enclosures overlap the double 12”s of the AiRAY in the 40 – 160 Hz range, adding punch and weight to the AiRAY cabinet. On the floor, 20 of Coda’s Sensor Controlled SCP-F dual 18” Subs were placed in a horizontal line. Three of the company’s new arrayable point source (APS) speakers were used per side for infill in conjunction with four high-output point source (HOPS) cabinets.

The rear speaker hangs providing the quad coverage comprised of 8x ViRAY speakers in each corner. A truss was flown between these hangs to run the cables to FOH, where they were powered by Coda’s Linus Amplified Controllers. Audio was transported from the Midas PRO X at FOH to the Coda amplifiers digitally and completely latency free with Coda’s LiNET Redundant Signal Distribution System.

“The entire Coda package provided for this tour was a complete dream to use,” said Adlib systems engineer George Puttock. “Audio quality was the prime concern for the Enter Shikari tour and the Coda System far outperformed all expectations. The added bonus that these speakers are also incredibly lightweight, easy to rig and efficient on amplifier resources was a massive plus… but completely incidental to the actual decision of quality first”.

“I can now honestly say that Coda is the best PA I have ever mixed on,” Russell added.