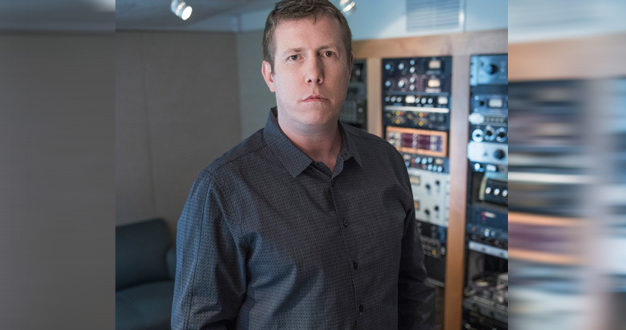 Darrell Thorp on recording the Foo Fighters’ Concrete and Gold

Seven-time Grammy award-winning Darrell Thorp (OutKast, Radiohead, Paul McCartney, Beck) is an American record producer, mixer, and engineer with over 18 years experience and many multi-platinum records to his name. Here, Colby Ramsey speaks to the man who helped record the Foo Fighters’ ninth studio album Concrete and Gold, which hit No. 1 in the US and UK.

How did you first get into the industry?

I always wanted to pursue a career in the recording industry, and started by looking around at four-year universitys and trade schools. Finally I came to the decision to attend the Conservatory of Recording Arts and Sciences, which is based in Tempe in Phoenix. I am from Tucson AZ so it was an easy choice to move to Phoenix and attend school there.

After the course I moved to LA, and the first job I was offered was an internship at Track Record. I ran and interned for a month and then they hired me full time. I was fortunate to only run for six months total before becoming a full-time assistant. From there I was hired at Conway and I worked there for a year, then finally to Ocean Way Recording. Ocean Way to me is my home, and the studio where I really learned engineering.

What advice would you offer to someone looking to get into the industry?

I was lucky to have a good career path working at different studios, and learned so much from working at all of them. If you are smart it’s a good thing to pick up tips and tricks from your clients, and it’s not a bad thing to ask the engineer after the session why he or she likes to work a certain way, or put a particular mic inside the kick drum. It’s also a good thing to study hard, learn your craft, and be ready for when the opportunity comes your way.

How did you get involved with the Foo Fighters and was there anything you did specifically with your recording setup on their album?

I was asked by the producer Greg Kurstin to come help record the Foo’s album. Greg and I had worked together on previous projects and I was really excited to get the call. For the Foo’s the idea was to have several drum stations going on. I had to think of a way to set up five drum kits, with two bass stations, about 20 guitar amps, keyboard station, vocal station, etc. And to fit all this on an 80-input Neve while running 24 track tape for basic recording then dumping into Pro Tools and comp.

Ultimately I came up with the idea to have two drum recording chains and patch all the kits across to the particular chain we wanted to use. Then a bass chain, and then a guitar chain for each player, a couple of vocal chains, one for lead and one for backing vocals. Then, using the busses for tape input, then to Pro Tools, worked out really well.

What is your favourite piece of gear in the studio?

The console. A good console goes a long way in a recording session. Give me a Neve 8028 or 8056. I really love to use the same mic pre-amps and EQ’s for every instrument to record. I find that using a Neve on this, an API on that, and Telefunken on this makes everything feel not quite as powerful.

My thought is that by using different pre-amps that have different electronics causes parts to react faster than others. The overall band or drums doesn’t feel like its working together. I might change a bit of EQ with an API 550a on drums, but I’m a big fan of compressing as I record. I usually hit things hard with the compression, -10 to -15db on the bass amp and -10 or more on the lead vocal. If it sounds good, why not!

What has been your greatest personal achievement?

Working in the business for 20 years with all the downs we have encountered is a personal achievement. I don’t know how but the phone keeps ringing and the emails keep pinging with more work. When someone wants to make a record with me, I’m honoured, and it’s amazing to say that I do this for a living and have been very successful at it.

I still feel like there is more out there for me to accomplish and I keep learning things – that is the best part of my job, I am always learning the craft. Mostly I am learning while getting paid to mix a song or track a song. It’s great when I do something I have never thought of before, or something that I have been struggling with as an engineer.

Do you have a favourite studio or artist you’ve worked with?

I have had the pleasure and the honour of working at some amazing studios. I would say my favourite rooms are Studio 2 at East West and Studio B at United (then Ocean Way). Both rooms have great consoles and the rooms themselves are effortless to record in. Put up a good mic from the locker, turn up the pre-amp a bit, push the fader up and check your level to tape or Pro Tools; sounds amazing.

In terms of artists, there’s too many great ones to name. Bands like Lake Street Dive are insane musicians and great to hang out with. The Foo Fighters is by far the most fun I have had in the studio, plus all the guys are just bad-ass musicians. Sir Paul McCartney is the kindest man on planet earth, and probably one of the most talented all around musicians, while Beck is my favourite songwriter/lyricist. Switchfoot are great people to be with all day, and are also amazing performers and musicians.