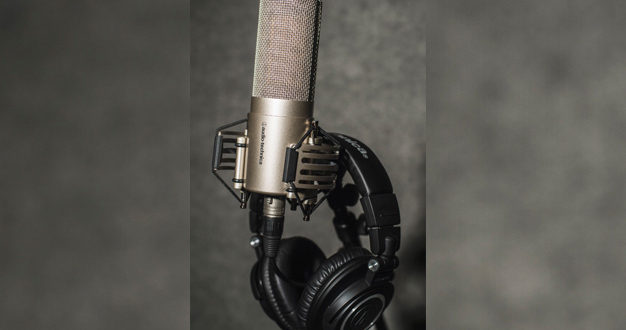 While some of the major microphone manufacturers constantly relive and revise their past glories, Audio-Technica have often sought to innovate, and the AT5047 under review is a perfect example of this approach. The immediately obvious difference between the AT5047 and almost all other large-diaphragm condenser microphones is the shape of the capsule. Non-circular transducers are not new and I have looked at those produced by Pearl and Milab in the past – the Swedes appear to be inordinately fond of this rectilinear format – but this is the first I’ve looked at from a major player in the microphone industry. Audio-Technica has previous in this regard with their AT5040 model and so the latest microphone is a member of a growing family.

There are some advantages to this transducer format that you can easily work out with a bit of geometric arithmetic – you can stick a bit more capsule surface area in your basket and this has a practical impact on the capabilities of the microphone. The AT5047 capsule actually consists of four 2-micron rectangular capsules which, according to Audio-Technica, gives it a combined surface area twice that of a standard one-inch circular diaphragm. This gives the microphone some advantages overcoming troublesome diaphragm resonances and with improved low noise performance.

The AT5047 is a transformer-based phantom powered design, something that gives it quite a different ‘sound’ to the sibling AT5040. This means that the AT5047’s self-noise level is slightly higher – but at 6dBSPL I’m not complaining. It has a fixed pattern with no pad or low cut filters – the latter I rarely use these days, preferring to cut rumble in the DAW after the event. The microphone appears immune to entirely loud noises pointed at it – the maximum SPL is 148 dB at 1 kHz with 1% T.H.D. It’s a beautifully built thing of aluminium and brass that weighs in at almost 600g and feels like it will take the slings and arrows of outrageous studio usage with ease.

The polar pattern presented by the permanently-polarised squarial diaphragm is cardioid and like other designs becomes more omnidirectional at lower frequencies. This, of course, makes it very useful for capturing vocals but perhaps less so on more diffuse sources. In fact, the AT5047 behaves a little like a shotgun mic in some respects, with a small ‘sweet spot’ and with much lower levels of audio ingress from the back and sides than most cardioid devices. This meant that it was excellent for vocals in my not-so treated space without the use of a rear absorber. The downside of this directivity does mean that this is not a multi-purpose use microphone. You couldn’t use it for X/Y coincident or any spaced stereo recording techniques – though it is fine as the centre microphone for mid-side use, in this case with an AKG 414 in figure of eight mode. However, this is not a criticism; many microphones are designed for vocal or single instrument use and here the AT5040 shows its mettle. The specification sheet contains a handy polar pattern graph showing how the AT5047’s cardioid nature changes with frequency and my testing demonstrated that it was a good indicator of how it behaves in the so-called ‘real world’. In fact, the polar dispersion has more in common with the 414’s hyper-cardioid pattern, albeit with better off axis-rejection. It comes in a nice ABS case with the unusual yet useable and robust AT8480 shock mount that provides excellent support and allows the weighty microphone to be easily mounted and removed. Audio-Technica say that the microphone is hand assembled and the discrete component filled circuit board is neat and well-constructed.

Comparison to my eighties and noughties Neumann U87 and mid-nineties AKG 414 demonstrates that the quality of the microphone extends from its build and looks to its sonic abilities. It leans towards the more clinical AKG sound than the Neumanns do, but the lack of any particularly annoying resonances, peaks or intrusive off axis reflections means that it takes compression and equalisation better than most. A brace of these microphones would be wonderful when recording a string quartet – as long as the performers stay relativity still that is! On vocals it captures delicate noises perfectly – which works better for some singers than others, of course – and, like the AKG 414 is possibly more suited to female voices.

The microphone’s ability to withstand a Brünnhilde in full Wagnerian vibrating sonic flight proving invaluable during the review period session as did its low noise when capturing a wispy singer-songwriter – the directionality meant that her guitar spill into the vocal microphone was well controlled. Again, like the AKG414, the AT5047 in general leans towards the bright side of neutral, making it perfect for capturing the natural tone of instruments or environments. The microphone excelled on spoken word, delivering all of the qualities of a good ‘radio’ voice without emphasising undesirable sibilance or nasality in the speaker. In fact, I’d go so far to say that this is the best large-capsule condenser I’ve used in this application and one that can retain these qualities in a less than perfect acoustic environment.

On vocals, the AT5047 captures delicate noises perfectly"

I use an Audio-Technica AT4033 as an-outside-the skin-bass-drum microphone which is, if I’m honest, as good as a Neumann U47 FET, so I was keen to see how the AT5047 shaped up to the task. The laser-like directionality was a benefit here as I could point the microphone right where I felt was the best sound from the drum, while the ability to handle high SPL and the extended frequency range also meant that I quickly achieved a decent sound. The natural side and rear acoustic suppression of the microphone meant that pickup from the rest of the kit was reduced. These advantages were also apparent when recording hi hats, toms and snare – the microphone being especially suited to capture delicate and dynamic brush drumming without too much ingress from the cymbals, hats or bass drum. Two AKG 414s and two AT5047s would suit me just fine to record the sound of a natural drum kit. The same qualities made the AT5047 also useful when recording brass instruments, though woodwind did present a few problems.

While the sound of the flute captured by the AT5047 was excellent, the natural movement of the player meant that level variations were readily apparent – though they were quite mobile! You don’t realise how much musicians move around until you try and record them with a microphone like the AT5047 – and don’t even get me started on what Trombonists do. I even tried the AT5047 as an ad-hoc boom mic and it proved a better bet than my AKG414 in hyper cardioid mode. So the AT5047 is actually quite a versatile microphone – just not always in the applications you’d expect!

The microphone is specified to have a frequency range of 20Hz to 20kHz with the inevitable fall off at the high end, but the plot supplied gives a decent indication where any troublesome frequencies may lie. The AT5040’s internal shock mounting design is also present in the AT5047 which, Audio-Technica say, decouples the capsule from the microphone body, making the microphone itself pretty immune to footfall, especially when loaded into the neat shock mount. The AT5047 has a 4dB drop in output sensitivity compared to its sister microphone – which is probably a good thing as some preamplifiers apparently struggled with the AT5040. I threw the AT5047’s signal into the microphone inputs of several audio interfaces and mixers without issue during the testing period.

Audio-Technica are not always the first name that comes to mind when choosing microphones, yet the company have a strong reputation of innovation and quality, with some of their models outperforming competitors at many times the price. The AT5047 continues this tradition and, if you need to isolate or record low-level audio or just want something that’s different in the vocal, instrument or drum mic cupboard, the AT5047 could be the microphone for you.