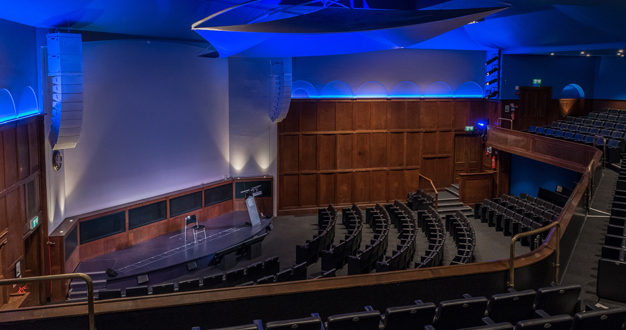 An extensive haul of APG loudspeakers was recently installed at the Royal Geographical Society’s lecture theatre in the heart of London.

The sound design for the theatre presented a number of challenges which were solved with the new, highly-scalable Uniline Compact range.

A total of 16 UC206N units were specified for narrow coverage while two UC206W speakers were chosen for their wider dispersion.

Meanwhile, four UC115B subs were installed along with 14 DX5 coaxial bass reflex speakers, all powered by the company’s DA:50 and DA:15 DSP amplifiers for monitoring and installation.

“The lecture theatre at the Royal Geographic Society was quite a challenge acoustically,” said Stewart Chaney, MD at Plus4Audio, who specified and integrated the whole system for the RGS. “Because of the large areas of wood panelling and an upstage PA position, there was a need for an accurate and highly coherent system.”

The whole system is controlled by a DiGiCo SD9 console and two 32:16 D Racks. The RGS also boosted its coms capabilities by investing in 10 of Sennheiser’s 2000 series radio mics and a Tascam SS-CDR200 solid state recorder.

“We selected APG’s UC206N from the Uniline Compact series due to its tight (70 degree horizontal) but even high-frequency pattern control, enabling full coverage of the space with minimal wall reflections and excellent gain before feedback,” added Chaney.

“On top of that, we specified and added the UC115B subwoofers, which allowed for a well-balanced and powerful system suitable for all of the venue’s requirements from speech presentations to live music. The system has been well received by all at the RGS and visiting productions alike.”

Previous ‘BBC engineers are known for getting stuff down in a few minutes’
Next ‘Coldcut were doing stuff when not many other people were doing it, because it was hard’