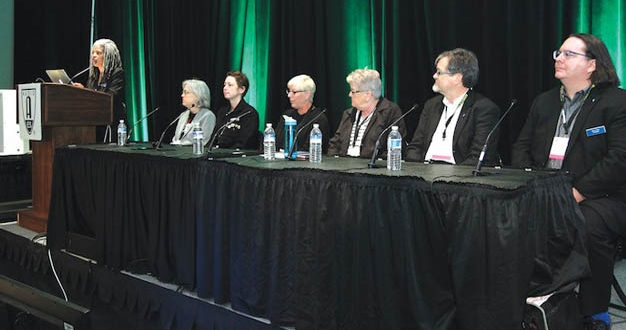 Moderated by AES vice president (Western Region) Leslie Gaston-Bird, the event was an effort to define the new committee’s purpose to 143rd Convention attendees and the general public.

Notably the first African-American to serve on the AES Board of Governors, Gaston-Bird preluded the open panel discussion by first framing the society’s diversity in terms of both demographic differences amongst its members as well as variances in disciplines, genres and styles within audio engineering.

“It’s so important to get different viewpoints on what diversity actually means,” said Gaston-Bird, “so I think it’s important for us to constantly engage with our membership and let them know that we are listening, and we want to appeal to everyone we can.” Gaston-Bird went on to explain how diversity stats are not clear, as reported by an August 2017 article in The Atlantic, reportedly due to members leaving out details on membership forms.

Creating more diversity amongst audio engineers in the future is indeed happening, explained Terri Winston, founder and executive director of the Women’s Audio Mission, and it all starts with education. “We’re heading into our 15th year, and we’ve trained over 10,000 women and girls in audio,” she noted. “We’re up to training 1,500 women and girls every year, and are about to push that to 3,000 women and girls every year. So we’re not focusing on the data; we know that the data is bad. We’re focusing on the solution. We’re very focused on education, [teaching] underserved girls.

“90 percent are girls of colour; 96 percent are low income. We are embedded in both the San Francisco and Oakland unified school districts, so we are looking at systemic change here. Our curriculum has been included in the Common Core for both of those districts. It’s great to see how great middle school girls take to this. The barrier is more around socialisation and less around their capabilities or interests.”

With a concerted effort from all of us, greater diversity in audio engineering will happen, instead of it being so segmented.

Leslie Ann Jones, recording engineer and producer, director of music recording and scoring at Skywalker Sound as well as this year’s AES Heyser Lecturer, praised the actions of fellow panelists as well as the purpose and promise of D&I’s efforts so far. “I think what Karrie [Keyes, executive director, SoundGirls.org] and Terri are doing in terms of girls and young women is so important. But I do feel like [inclusion] has to be a very holistic effort,” said Jones. “Things have really changed since I started—hearing conversations about people using a genderless name [on job applications] so that they can be treated equally. I chose to use my middle name so people knew that I was a woman … [but] I think, with a concerted effort from all of us, [greater diversity in audio engineering] will happen, instead of it being so segmented.”