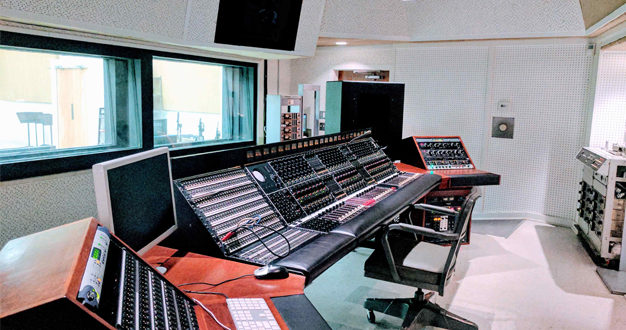 After a decade of dormancy, the legendary Sound City Studios on the west coast of the US has catapulted itself back into the spotlight in a big way. Colby Ramsey speaks to studio operator Olivier Chastan to find out more…

Sound City Studios is back in business. The subject of Dave Grohl’s 2013 documentary (and the birthplace of classic recordings by artists ranging from Fleetwood Mac to Nirvana) has been closed to the public for almost ten years, but this year has seen the revival of the iconic Los Angeles venue.

Earlier this year, partners Sandy Skeeter (daughter of founder Tom Skeeter) and studio operator Olivier Chastan set about rebuilding the studio back to its former prestige, filling its rooms with a plethora of vintage analogue equipment and modern digital technology, including not just one, but two legendary Helios recording consoles.

Skeeter runs the whole music-centric Sound City complex of which Sound City Studios is the beating heart, while studio manager and engineer David Andersen takes care of the day-to-day running of the studios including all bookings. However, it is studio operator Olivier Chastan who was responsible for acquiring the two Helios consoles which now grace the control rooms of the facility’s two main recording spaces.

After moving to LA for business reasons and hearing about Sound City Studios through a mutual friend of Lenny Kravitz, Chastan met with the Skeeter family, subsequently acquiring an impressive haul of audio equipment before moving in and deciding to relaunch the studio, which at the time was only being used as rehearsal rooms.

“The place is absolutely stunning with 40-foot high ceilings – and is probably the best sounding room on the West coast of the US,” Chastan claims. “The standard was already so high so I just wanted to maintain the place and give some of the special equipment I’d acquired a special home. For me to put it in some non-descript room made absolutely no sense.”

The Helios Type 69 console in the main control room at Sound City – the same model that was used in a number of prominent studios including Island, the Manor, The Rolling Stones Mobile Studio, and Strawberry Studios – is said to be one of 11 surviving consoles and is in “absolutely spotless condition,” according to Chastan, who believes it needed to shine in a place that not only has a rich history but a great sonic quality and character too: “That’s the history I care about – that everything that comes through Sound City over the years sounds good,” he says.

“The main reason for this is that live room A and Studio B are extremely well balanced,” he adds. “That’s something that was just a historical accident, because it was originally a factory for Vox amplifiers and so has continued to sound exceptional over the years. I therefore thought it deserved an amazing haul of equipment, and vice versa.”

A slice of history

The live room A remains completely untouched and is exactly as it originally was when it was built in 1969, whereas the control room needed some additions prior to the relaunch. Chastan replaced the classic horn-based speakers with ATC monitors – SCM200 mains and SCM20ASL nearfields – which go down to 30Hz over 1000w.

“The room couldn’t take the bass, so we put in some additional diffusers to control the bass a little bit,” explains Chastan. “It’s a very ‘60s control room that is only 14ft deep, so we don’t have the benefit of being able to control standing waves in the same manner.”

While ATC monitors are utilised in the main control room, JBL mains designed by leading US studio designer and acoustician George Augspurger – who has been looking after Sound City since the ‘70s and continues to help Chastan and co navigate the improvement of the control rooms – provide feedback for Studio B.

With an extensive microphone collection that includes AKG, Electrovoice, Shure and Sennheiser – along with an equally extensive selection of audio interfaces, compressors, EQs and preamps – Sound City Studios is far from short of recording options.

Yet the backbone of the studio is undoubtedly the two Helios consoles, whose history is as impressive as Sound City’s itself. The first Helios console ever made was built for Olympic Studios, often frequented by Led Zeppelin, The Rolling Stones and The Beatles: “Helios lied at the heart of the golden era of rock and roll, and a huge amount of classic hits were recorded on these consoles,” said Chastan. “I think we’re the only studio in the world that has two.

“When I was looking for gear for Sound City and first heard the Helios, it was like a revelation, so when I came to acquire the first console for Studio A – which is from 1973 – I jumped at the opportunity,” he recalls. “It is entirely original and was restored totally to spec by famed electronic engineer Dave Amos. It carries so much history and it is a great example of a console with flexibility and pristine clarity.”

The second Helios console from 1969 is arguably the more historically interesting of the two however. Chastan explains that it was a custom request from Island studios, built not as a regular recording console with preamps, but as a returns console for mixing, and used by the likes of Joe Cocker and Black Sabbath. The console ended up with renowned German mix engineer Jürgen Koppers, who used it to mix many Donna Summer and Kraftwerk records.

“After this it went to the US and disappeared soon after,” reveals Chastan. “I then randomly came across it on Craigslist and now we’re nearly done with the restoration of this one, which will be in Studio B.

“This is great because it is going to be the perfect console for the Pro Tools user (Sound City operates with Pro Tools HD 10), meaning no outboard preamps and some of the best EQs on the planet – It’s a real mixing desk where you can visualise your work,” he continues. “It’s an interesting combination of a very modular-based console with lots of flexibility while still retaining the sonic character that makes Helios consoles so great.”

Back to the grind

While Chastan and co started taking bookings in May, the studios officially reopened in July, starting with a launch party that was attended by 350 people. “This made a bit of noise,” says Chastan. “Just being out there and talking about it, you can see there’s already interest on a national scale. Fall Out Boy have been in recently, as well as mix engineer Mark Rankin, so there’s already a lot going on which we feel is really starting to help the studio come together.”

While the impressive history of the facility itself seems enough to attract artists, producers and engineers far and wide, the core aspect of the studio is its sonic consistency, clarity and balance. Due to its neutrality, Sound City Studios’ rooms are ready to record a wide-ranging variety of genres from jazz to rock projects, which is reflected in the records that have come out of there over the years.

“There’s an echo chamber in the studio which is a unique touch, and we’re also represented by Miloco now which is really great,” Chastan explains. “One of the challenges for any studio today is that people come with a lot of baggage, so many artists are unwilling to experiment. It’s really important to us therefore that people give the entire experience a chance, which means we’re willing to meet everybody halfway by having them come and do a complete test run of the studio when they want.

“Fleetwood Mac, Rumer and Nirvana have all been here and while they’re all very different, it all works here at Sound City,” Chastan concludes. “The consoles, and more importantly the rooms, do not get in the way and having great equipment means that not only are you going to get a great sound, but you’re hearing exactly what you’re supposed to hear.”