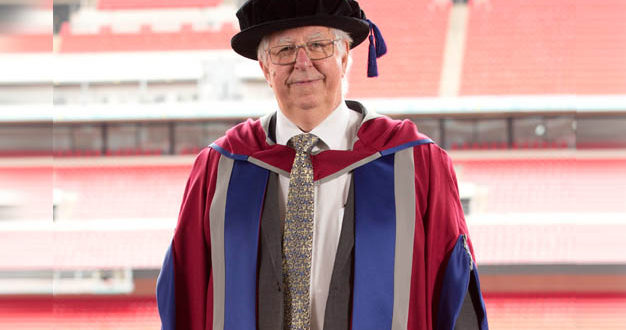 Eddie Veale is a pioneering studio designer who counts John Lennon’s home studio amongst his credits. Here he talks to AMI about his career highlights, the early days, and his recent accolade from the University of West London…

What was your initial reaction to receiving your Honorary Doctorate?

My reaction was one of total surprise – I hadn’t expected them to consider me for such an accolade! I’ve worked with them for the last three and a half years, during which time we’ve designed and organised the building of a number of studios for them. We also handled the acoustics for a number of other projects there including a new space called Weston Hall, a 300-seat auditorium that has already proven popular with the orchestras that visit the university. We’ve had some great feedback about their music studios and post-production facilities, which were completed some two and a half years ago now.

How did you first start out in the studio design industry and what do you feel have been the most significant developments over the years?

I guess it began when I joined a company called Advision based in Bond Street. Everyone was using Ampex four-track recorders at the time, while a US-based company called Scully Recording was developing and producing the eight-track recorder. The head of Advision soon decided that it would be good to become the first eight-track studio in London, so I started to learn about studios and desks very quickly and it was a thorough learning curve process.

We then turned the film and dubbing theatre into the first ‘rock and roll’ studio, where many shorts and TV ads were recorded. Advision then became the first sixteen-track studio, and I subsequently set about getting Moog synthesizers into the UK and Europe. I also remodelled the studios at Advision even though the types of materials available at the time were very basic.

I was then introduced to a Swedish musician who had a lot of great ideas about acoustics and how control rooms/studios should sound. That was really enlightening because we wanted to use better materials for the new premises, so this is when I discovered a sound-absorbing product called Rockwool and we shipped the first container of it over to the UK.

What have been the highlights of your career?

An invitation to Saville Row lead to my introduction to John Lennon, who wanted a home studio built. That was certainly the first home studio in the UK and probably in Europe built to professional recording standards, and the studio where Imagine was recorded, which I also got involved in.

If you have the opportunity to push a boundary, push it as far as it will go."

I’d met George Harrison previously after his Moog synthesizer that he was using to record Here Comes the Sun at Abbey Road developed a fault, and being the Moog guy at the time, I went along to sort it out for him. When he bought Friar Park, he asked me to help build him a studio there, during which time I worked for all the major studios. My time spent working with George was a great opportunity for me to develop new ideas.

Around that time I also got the job of building Beacon Radio in Wolverhampton, which was one of the first commercial radio stations that was presenter driven. Consequently, some others and myself created an automation package for some smaller commercial stations after the IBA recommended us.

What have you been working on more recently?

I’ve been involved in cinema with Dolby Atmos, bringing immersive sound to cinemagoers – we did the Starr at the Tate Modern, which has proved popular for corporate events. We’re also wrapping up a project with the University of Winchester, for which we’ve ended up designing and building two studios for them as part of a new course. We’re also working with a couple of games companies on the audio side, and having lots of discussions about immersive sound with companies and universities.

What advice can you give about how NOT to build a studio?

The critical thing in any circumstance is the control room or listening room, because if the room has influences, the recording will reflect that. It needs to be benign with an accurate reflection of the speaker output, which also needs to be faithful to avoid colouration. You can hear the defects of a recording space and you’ll either be able to rectify them or put them to good use to enhance a recording in some quirky way.

In which direction do you see the industry going in the near future?

My philosophy is, do what you enjoy and enjoy what you do – if you have the opportunity to push a boundary, push it as far as it will go. With this in mind I have risen to such challenges and received enjoyment from overcoming them. There’s a lot more respect and interest in good studios, be them large or small. I think people are discovering that, while there are a lot of things that they can do in their bedrooms these days, there are also many thing that they cannot do.