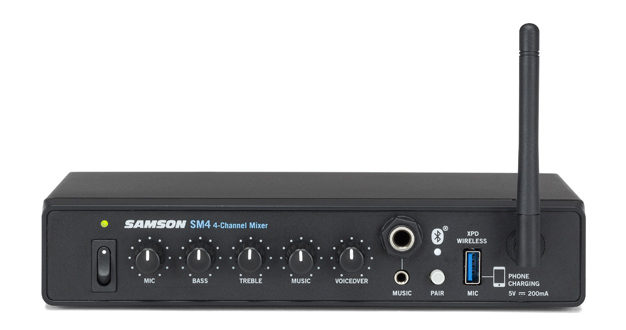 With its compact, half-rack steel chassis and rackmount kit, the SM4 is ideally suited for environments such as fitness clubs, gyms, restaurants, nightclubs and schools that require a versatile audio solution.

The Voiceover feature means users can lower the music (up to 30dB of ducking) while talking through a mic or using the XPD Wireless port. The Voiceover Threshold knob lets users adjusts the active ducking hold time from 0.5–3 seconds, adding critical intelligibility for activities such as leading a group exercise class or making announcements at a restaurant.

For fixed installations, the SM4 can be fixed using the included rackmount kit, mounted side by side with a Samson CR88, CR288 or CR99 wireless receiver. The mixer also features stereo XLR and RCA outputs, a mono/stereo switch for use with a mono sound system, and a rear-mounted master volume control.