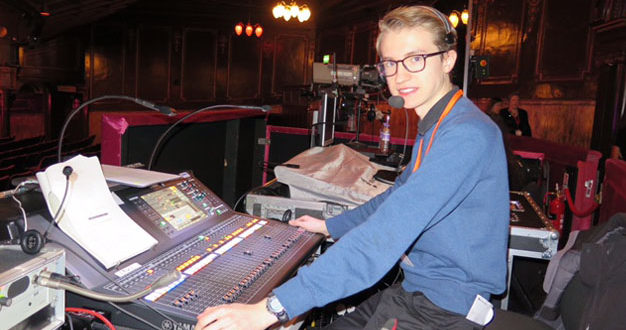 With the 2017 Pro Sound Awards just around the corner, our last Rising Star finalist Arran Paul tells us why he deserves to be recognised as the industry’s most promising young professional.

At only 19-years-old, Paul programmed all Dante networking for the The Prince’s Trust Awards, which was recorded as live. This was a fast rig and set up at The London Palladium, setting up on the Tuesday morning for the show the next day at 2pm. It worked first time and with the likes of Andrew Lloyd Webber and the management team from The Prince’s Trust to satisfy, he calmly and confidently took charge of all Dante networking.

What are you up to in terms of studying at the moment?

As of this September I am studying a degree in Broadcast and Communications Engineering at Birmingham City University. I am also currently employed by the BBC on their Broadcast Engineering Apprenticeship programme and will undertake 11 weeks of university per year for my three year degree course, while the remainder of my time will be spent working on placement with the BBC.

What do you believe has set you apart in the industry so far?

Through my work in the professional sound industry and my personal and professional development through my time at Audioworks, I believe I gained valuable experience that enabled me to successfully gain a place on the BBC Engineering Apprenticeship. Much of my work with IP and Dante as well as working on the The Prince’s Trust Awards OB and other large corporate events enabled me to have a good understanding of the AV engineering world and gave me an eagerness to learn more and expand my skillset.

What is it that you like about the networking/IP side of the job?

My favourite thing about IP networking in audio is the capability that it adds to produce more inventive and ambitious productions than would be capable with standard non-IP systems, whether that is through networking the control of a console to operate it remotely, allowing an assistant engineer to tweak settings without interrupting a rehearsal, or through networking two consoles together to share head amps and audio signals through Dante.

I discovered that I had a knack for IP networking when the Dante technology was first released and I began experimenting with two consoles sharing sources and outputs through a very simple network. I really felt at the time like this was something I had to learn more about so that I could incorporate the technology into more professional projects.

What was the biggest challenge you encountered when networking Dante for The Prince’s Trust awards?

For the awards, we utilised a fully IP audio pathway with Dante linking all inputs, consoles and outputs together in a network with multiple switches and through the network remotely controlling the head amps of the monitoring desk (taking a large number of onstage inputs) from the FOH console. This was an interesting network to plan and involved segmenting out our Cisco switches to operate two VLANs for carrying separate traffic, while also enabling us to use existing network cabling within the London Palladium.

In addition to this, the programming of the ‘port to port’ head amp sharing feature on the Yamaha consoles was slightly perplexing in that head amps could only be shared when routed to specific locations on the Dante network. Through warehouse testing I discovered that the control of head amps throughout the network uses a specific chip within the console and that this is only looking for control signal within a certain Dante network range. Once discovered it was simple to route all ‘port to port’ channels to the usable Dante network range.

In addition to this it was necessary for us to pass talkback through the Dante network to the OB truck for presenter TB. My testing found that a direct signal pass-through from one remote I/O rack input to the output of another without passing through a console worked flawlessly and input gain could be controlled from a laptop running Yamaha’s R Remote application. Having pre-programmed the devices, it was a simple network assembly for the rig and everything performed exceptionally well.

What are your aspirations when it comes to a career in audio?

I am very excited to learn more about the developments with IP in audio as Audinate implements AES67 in Dante and I hope to one day have the capability to be able to directly interface a Dante network with a modern OB truck using AES67, allowing for a streamlined audio pathway without the need for I/O racks or MADI conversion at the OB end. I would also like to improve my operational skills as well as learn more about utilising Dante through a non-dedicated existing network such as that in a school or office.

Previous Not long to go until 2017 Pro Sound Awards – final call for tickets!
Next The Warehouse Sound Services to host demo day for Adamson loudspeakers in October