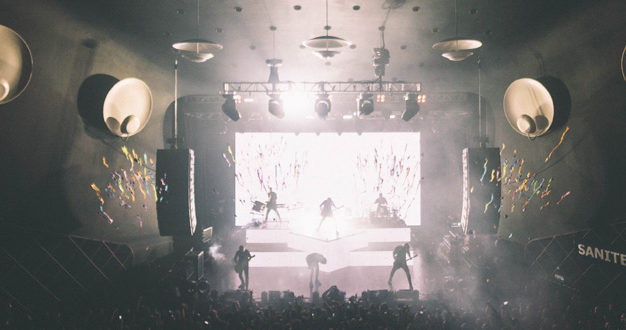 Sheffield’s Bring Me the Horizon (BMTH) used d&b audiotechnik J-Series loudspeakers on their first UK arena tour at the end of 2016.

Kicking off at Nottingham’s Motorpoint Arena, the tour represented the deathcore/metalcore band’s largest gigs to date following the release of their fifth LP That’s The Spirit.

d&b has long been a fixture at BMTH gigs, with the technology a favourite of front of house engineer Oliver Hutchinson. Wigwam/SSE were responsible for supplying all the gear for the gigs.

“I am a huge fan of d&b and would happily never use another system ever again,” said Hutchinson. “It’s the only PA that can deliver what I want from all frequency bands; the crystal clear clarity of the highs, the low punch of the mids, and the note perfect reproduction of the sub programme material. No other sub manages to reproduce all the notes of our sub bass tracks with such an even response combined with such trouser flapping power.”

Wigwam/SSE system tech Jack Murphy was brought onboard early in the process by production manager Rob Highcroft with the brief of making sure the PA was not in the sightlines of the 36m wide, 11m high video screen.

It’s the only PA that can deliver what I want

The FoH setup included eight J-INFRA subwoofers and fourteen J-SUBs hidden in an array under the stage to achieve a low end impact – which is the band’s preferred option. On top of this, monitoring engineer Jared Daly had sidefills of J8 and two additional J-SUBs per side and two J-SUBs under the band’s risers. According to Murphy, the setup worked better than expected.

“I don’t use any processors at all – no Lakes or Galileos; I don’t think it’s necessary. Once you’ve got your tonal balance tools set up, your HFCs and your coupling filters and perhaps a bit of EQ, you don’t need much else,” explained Murphy. “There’s so much EQ available on the D80s that there’s not any need for anything else to be in the line. With a good network that runs super quick, there’s never any issue even though there’s no ArrayProcessing in this particular setup.”