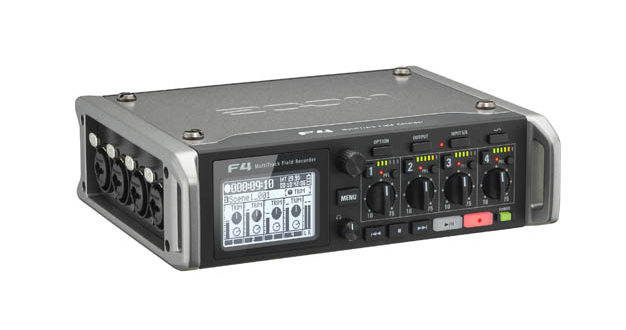 Zoom set a tiger among the pro location pigeons when they released the F8 recorder. Eight mic inputs, iso recording of all eight inputs and a mix (up to 96Khz) and time code, and all this location goodness for less than a grand ex vat.

Following in the F8’s footsteps Zoom have released a control surface and the F4, baby brother to the F8, making up a family system of some power and sophistication. Today we’re looking at the F4 as Zoom offer professional level features at an even more affordable price. So what is the deal with the Zoom F4?

Well, as you might expect, out of the box it is a four input recorder and mixer with iso recording of the four inputs and a recording of the stereo mix. The F4 is expandable to six inputs via the Zoom ten pin interface on the back, this socket accepts standard Zoom mic capsules and if you want more flexibility you could add the EXH-6 interface which accepts external mic or line sources.

Going down this route turns the F4 into a six channel recorder/mixer and the Zoom can record all channels and a stereo mix up to 192Khz – if high sample rates are your bag. The mic amps on the F4 are the same as those on the F8 and offer a bad ass 75dB of gain – ribbons welcome here. Get in touch if you are doing location sound with ribbon mics! Phantom is available at 48 or 24V, no T powering option – this is the 21st century after all.

Ergonomically the F4 is very straight forward. Four combi inputs on the left – you’ll need to use the quarter inch jack sockets if you want to feed line level in. The front panel sports a mono screen, four encoders for level, headphone volume, transport controls and additional controls for the menu system, PFL/Solo and track select along with four special function buttons. The right hand side has two full size output XLRs – hooray-ish, output is at -10 and don’t stick phantom up them! There’s a sub output on minijack, also on 3.5mm jack a tape return, a quarter inch headphone jack and mini USB. The tape return input, which can handle -10 or +4, is selectable to inputs five and six, when used this way hitting the input 5/6 custom button the front panel sends a prefade listen of the tape return to the headphones. Very convenient – but at the cost of recording tracks five and six. The main encoders are switchable between ‘Trim’ which governs the track record level and ‘Fader’ which is the contribution of the input to the mix. So set your trim to give you lots of headroom just in case, then switch to Fader and mix. One wrinkle here is that the encoders are not motorised so when you switch from Trim to Fader (or vice versa) you need to sweep the encoder across the the previous position to pick up control where you left off, The F4 offers dual SD card slots and these will accept cards up to 512Gb – check the Zoom website for confirmed compatible cards.

The Zoom offers several different options when it comes to recording – you can record all your inputs and your mix on one card. You can record in duplicate with a full back up running on your second card. Or you can distribute the iso recordings and the mix across the cards. Isos (inputs one to six) on one card and the mix on card two. As an extra safety feature the recorder closes the record files at regular intervals and so should disaster strike you will not lose all the file. I tried pulling the card out of the recorder while in the middle of a take and I lost about ten seconds of audio, the rest of the file was completely intact and usable.

Another feature of the F4 will appeal to the paranoid, and who isn’t paranoid on set today? This is dual recording, a feature available on channels one and two. In this mode you have a second track simultaneously recording say input one, and this second channel has independent settings for a range of options. The most obvious being trim gain. A simple workflow would be set channels one and two to dual recording, set the main encoders to trim gain and now channel three is a duplicate of channel one and four a duplicate of channel two, with gain and other input options fully variable. So you cheekily set trim gain on channel one to just below clipping to max out your signal to noise but then give yourself a safety back up on channel three by turning the gain down on that track by say 10dB. This feature is a bacon saver, particularly as the F4 offers input limiting on each track after the analogue to digital conversion, which means it is possible to overload the analogue input before you get to the limiters.

Timecode is a key feature for location recorders and the F4 offers timecode in and out on BNC connectors, not as neat as a Lemo but robust and widely supported. The Zoom supports seven different formats with extensive support for drop and non drop standards. You can jam the Zoom from external code, run it off the internal real time clock and if you fancy you can set your F4 to auto record when it sees the external timecode running. And if you have a trigger happy camera operator the timecode menu allows you to set a record delay, which means the recorder will ignore very short runs of timecode with the duration configurable up to eight seconds. The timecode functionality and accuracy of the Zoom devices are key to their pro credentials, I know loads of people live without timecode and sync in software or manually but I would take the view that timecode is probably a professional Rubicon that needs to be crossed to establish pro credibility. The F4 manages that with one caveat – the recorder doesn’t have an onboard backup battery – so if you switch off for lunch then you will need to resync when you power your F4 back up. This is inconvenient but in my book not a deal breaker and is helped by the flexibility of Zoom’s powering options.

The F4 can be powered by eight AA batteries – which is a lot when you consider the diminutive dimensions of the Zoom – and in true pro fashion Zoom have fitted a standard Hirose four pin power connector. And yes, if you have a battery pack in place you can change the supply to the Hirose without interrupting the operation of the machine. So if your worried about re-syncing your timecode, don’t just stay powered over lunch. I can’t imagine any pro users relying solely on internal batteries. I did notice with my rather aged lead acid that the low battery warning took me by surprise with shutdown before I could reach for the internal battery pack. To my shame I hadn’t kept my eye on the battery indicator, the moral is avoid embarrassment – keep a set of AAs on board.

The F4 is a recorder first, a mixer second and a usb interface third. Plug the Zoom into your PC (Windows 7 and up) or your Mac and you’ll have all the F4 shine right there on your desktop. But I don’t suppose many people will buy the F4 because they need a soundcard. No, the first customers for the F4 will be location sounders keen to get a foot on the professional ladder for the price of a meal for four in a motorway service station. If you’re thinking, ‘Is this for me?’ I suggest you start with and stick by the answer to the question – how many record tracks do I need? Remember the F4 is a recorder with mixer functionality, it is not a dedicated mixer per se.

If you need four tracks then an F4 is far and away the most affordable option for you. Six tracks is tricky – you are moving into F8 territory, but if you ‘might’ need six but mostly need four, in some ways the F4 is a better bet. You don’t get the bluetooth iOS option and you don’t get the colour screen. But you do get full sized XLRs for outputs, you get finger friendlier encoders and extra buttons on the front panel – oh yes and a big chunk of cash to spend on ice cream. I think the F4 is a winner.