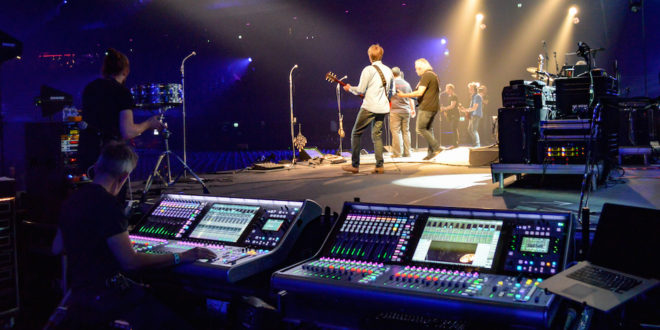 The Analogues’ aim is to recreate the last six studio albums of The Beatles using the same instruments, amplifiers and arrangements, complete with strings and horns – all played live.

They’ve already managed to track down and restore period instruments from all over the world, such as a rare Lowrey Heritage Deluxe Organ, as used on the introduction to Lucy In The Sky With Diamonds.

To date, the band have performed Sgt. Pepper’s Lonely Hearts Club Band and Magical Mystery Tour and will start touring The White Album from January 2018.

They recently celebrated the 50th anniversary of the release of Sgt. Pepper with a sold-out show at the 17,000-seat Amsterdam Ziggo Dome.

The event saw complete performances of both Sgt Pepper and Magical Mystery Tour, with an additional SSL L500 – operated by Sydney van Gastel deployed to accomodate a range of special guest performers on the night.

"The Beatles never had to play these songs live and so had far fewer problems with crosstalk or feedback to deal with," said Luijten. "For example, we didn’t want any screens on stage, so the drum kit is not isolated. And the strings are right behind it.

"Even this was not an insurmountable problem for the team. They settled on a piezoelectric contact element and microphone combination, using the piezo for the bulk of the sound with the microphone signal blended in. Even only two meters behind a drum kit, it works, which is nice"

"Normally we have around 100 to 110 inputs," said Luijten. "There are a lot of vocal positions for each musician, a lot of instruments that are only used for one song, and of course we have an orchestra and the percussionist.

"For every vocal I have a four-band dynamic EQ. Those old mics are really sensitive to the proximity effect, so the SSL dynamic EQ kicks in when needed and does a great job.

"One of the main effects I use is the SSL Tape Delay of course. I have it set up on a macro key so I can bring it up on screen with one button press and easily edit it."

Luijten says that he trialled a few different consoles, spending a day with each one, but chose the SSL Live L500 in the end.

"The main thing about this console is obviously the sound," he said. "They were all good, but this one really stood out – and that’s the most important thing for us."