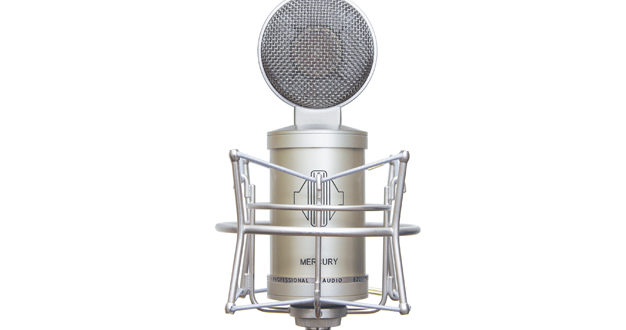 Ross Simpson lines this variable-pattern mic up against its older sibling to see what improvements have been made.

And so it has arrived – the much-anticipated follow-up from Sontronics to their award-winning Aria microphone.

The formidable and robust Mercury is housed in a matte-finish metal body and presented in a custom wooden box, all secured within an aluminium flight case, together with a somewhat large shock-mount and separate power supply. A nice feature is the blue “tube ready” LED on the front of the PSU, and an eight-pin power cable, which has a neat way of locking sturdily at both ends of the power to prevent accidental removal from an over enthusiastic performer.

At the guide price of £1,349, this dual capsule valve mic comes well equipped with cardioid, figure 8 and omnidirectional polar patterns, and if that wasn’t enough for you, just use the single control knob on the power supply for manual adjustment between all the three settings and everything in between. One minor comment would be that I’d like to see a clearer marking on the polar adjustment knob as to where it is positioned. Other important features are a -10dB pad and linear 75Hz high pass filter switches, also positioned on the front of the PSU.

Boasting incredibly low self noise of ≤12dB (A-weighted), a frequency response of 20Hz-20kHz and a max SPL of 125dB (for 0.5% THD @ 1kHz) this highly sensitive mic (18mV/Pa -33dB ±1.5dB) can successfully capture anything from the delicate bowing of a timid solo violin player to the dynamic energy of an angry rock drummer.

Attention to detail hasn’t been spared on the shock-mount, where improvements have been made on the adjustment. The Aria’s wing nut really had to be nipped home, sometimes without success as you would see the mic slowly drooping during a take. Now there is a clever locking lever allowing for a much tighter grip. This improvement has of course been necessary to secure the weight of the Mercury that comes in at just over 2kg. Good quality mic stands in the studio would be another must to support this heavier mic adequately, especially if used as drum overheads.

Its cardioid sibling, the Aria, is already a staple at Woodbury Studios and is used more than our much-loved Neumann U87, which previously had been the go-to mic.

My first test was to employ both the Aria and Mercury for a mid-side acoustic guitar recording through our Neve 1073. The Mercury was the side set to figure 8, and the Aria was the mid. My initial reaction was that by using the Sontronics mics there was a closer relationship between the sounds than I would’ve got using mixed brands. The Aria is not as bright as the Mercury, which certainly stood out when listening back. I would have preferred the Mercury as the mid mic and then have had something else as the side as it would have worked better.

I then used the Mercury as an ambient mic on a drum kit, placed around a metre in front of a drum kit, this time with a Solid State Logic VHD preamp. This worked very well as I was able to play with the polar pattern knob, enhancing the snare drum’s punch in cardioid and enabling me to focus it forward in the mix or to bring out more of the room when going more omni. Lifting the gain a little more in the mix gave the cymbals a more developed sound, which had superb colour about it. For the overheads on this session, I used a pair of our Neumann KM184s, which work very well, however I would have very much liked to have had a pair of Mercurys to try.

What of vocals? More often than not when previously using the Aria we would tend to boost higher frequencies a little to give the vocal an ‘air’ and to bring it out in the mix. However, with the Mercury, albeit initially sounding very bright, sat in a mix there is much less tendency for the need to boost anything, while retaining that wonderful warm sound that I have come to love about the Aria.

I had the chance to try the Mercury on a fairly low and somewhat dull male vocal. This is another area that the Mercury excelled, as its instant clarity and brightness pulled it alive and kicking into the mix, without sounding brittle or fake. Having said that, with an already bright and sibilant young female vocal I tried, the Mercury can sound a little harsh; this was managed with a little attenuation around 12k but does lead me onto the point that using the right mic in the right position, sounding as you want, right at source is a must, and in this instance I would have chosen the Aria.

This is a truly great sounding and versatile valve mic bringing plenty of that character, that warmth and detail that many others simply cannot achieve at the same time. Its versatility is without question, together with an even greater clarity than the Aria. However, the Aria retains a uniqueness of its own which I also like. I hesitate to use the first comparison that springs to mind of the very different but equally attractive characters of my children. I couldn’t choose between either.

Ross Simpson began his career as a professional dancer/singer, working with the likes of Kylie Minogue and Geri Halliwell. He now runs Woodbury Studios. www.woodburystudios.co.uk