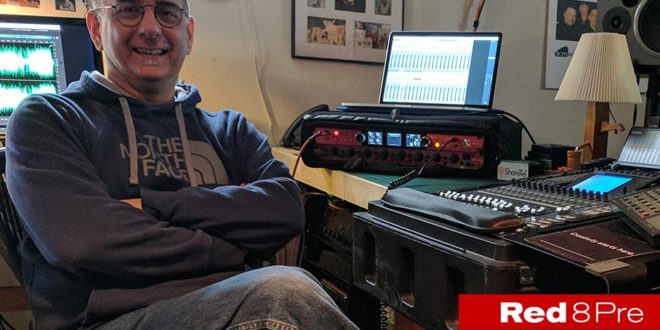 Sound recordist Matthew Weiner, whose career highlights include working on recordings for The Village People and Diana Ross, has been speaking out about his decision to add a Focusrite Red 8Pre to his audio arsenal.

“You could say I’ve been in audio from the patch bay to the switch,” he joked, and throughout that journey, Weiner has continued to do remote recording sessions for jazz artists like vocalist Lauren Hooker, bassist Bill Moring, drummer Tim Horner, guitarist John Hart and bassist Mike Richmond, among others.

Weiner has always strived to stay up to day with the latest developments in pro audio technology – a mindset that led him towards the Red 8Pre, Focusrite’s new eight-preamp interface that features 16 analogue inputs and 18 analogue outputs from a total track count of 64-in/64-out, all in a 1U rackmount and with dual Thunderbolt 2, Pro Tools|HD DigiLink and Dante ports.??

“The Red 8Pre is amazing,” said Weiner, who uses it out on location and back at his Radiance Recording studio in Teaneck, New Jersey. “The efficiency it provides me is second to none – in a single rack unit, I can connect 24 channels of mics in addition to the eight it has built in, and utilise 32×32 Dante from anything to anywhere, routing any of the 16 analogue I/O and 16 ADAT I/O as I need to without limitations. Also, I can provide a balanced analogue output and two unique headphone mixes with separate volume knobs. I can also pass through another Dante device as the 8Pre has a second network jack, making this like its own mini router.

“As a result, it’s easy for me to hang another audio device that supports applications utilising the Dante audio-over-Ethernet media networking. I use as an additional way to drive a two-track output with volume control or to a router and my Yamaha DM1000v2 if that’s the right tool for the job.” ??All this functionality in a single rack space and over a single Cat-5 cable lets Weiner expand his remote recording capability while keeping weight – and thus costs – way down. “The Red 8Pre is Dante compatible, so my cabling can consist of inexpensive Cat cabling and an RJ45 jack; an equivalent Lightning/USB connection doesn’t go far, and for any distance you need to go optical, which costs way more to cover footage that is not even close,” he explains. “Compare function, flexibility and cost, and the Red 8Pre wins out every time. It also has two Thunderbolt ports, so once again, depending on how you choose to work, you have options and you can send anything anywhere. This really could not be easier.

“Oh, did I mention that my new rig weighs half of what it did before? On my current project, I am overdubbing through the Red 8Pre and using it for routing as part of my Dante system. The delay is in the microsecond range, and it’s not at all noticeable to me or anyone that has been in the studio with me since I got it. Some highly educated ears said basically ‘Wow!’ With my Macbook Pro, two rack units and a few mics, I’m pretty dangerous. Congrats, Focusrite – I think you have a category killer here.”