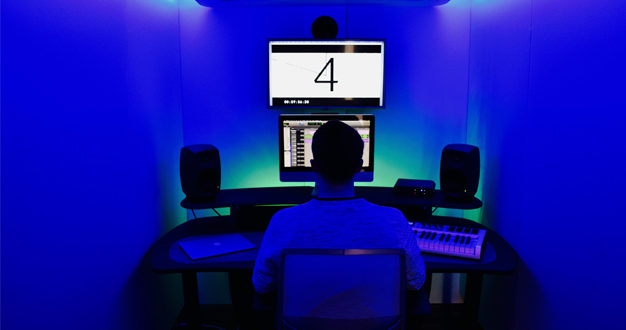 We spoke to one of the men behind a radical new initiative that involves turning shipping containers into high-spec creative spaces, and discover why it’s not as crazy an idea as it first sounds.

Combining the essential attributes of a proper studio within a mobile shipping container, SpaceCrate is an intriguing new solution for carrying out recording duties from any hard-standing location.

AMI recently spoke to co-founder Ben Nemes about how he and his team have turned a fun idea into a reality by putting a professional-spec creative space in a shipping container.

Nemes revealed that long-term acquaintance Guy Wilson of AKA Design was involved with the project from the beginning, with the aim being to make people feel at ease as soon as they walk in.

“I wanted to make it conducive – to make it look and work like somewhere that customers want to work,” said Nemes. “Guy got the idea straight away so he’s our creative director and has been tasked with making SpaceCrate look, smell and feel like somewhere you want to be creative.”

Nemes, who worked in post for TV and film for 15 years before his stint at Avid, originally conceived the notion for SpaceCrate after “20 years of conversations about the fact that everything’s changing,” with the fundamental idea of putting creative capacity somewhere it isn’t already.

“Gear is so much more lighter and compact – that’s an enabling factor,” remarked Nemes, “while it’s also a bit mainstream now to understand that you can use shipping containers as a premises because they’re every bit as strong as a brick building.”

Of course, the infrastructure and the apparatus for moving a container around easily and inexpensively exist already and are accessible all over the world, meaning users can obtain the capacity to record, edit, mix and deliver anywhere they can place a shipping container.

While a mobile studio or OB truck earning its own money will be moving around regularly, and SpaceCrate could also work this way, Nemes sees it as more of a semi-permanent solution that might not move from one year to the next, in which case, the user can call upon the means of transportation when they need it, “instead of owning a big truck that’s depreciating and needs servicing regularly,” said Nemes. “Call up a haulage company and say you want it to go from postcode to postcode because it’s a box standard container on the outside, and in 90 seconds it’s off the back of the truck and on the ground because it’s a routine process all over the world.

“Wherever you put it, it’s never going to rust or fall apart like perhaps a caravan would – these things are designed to withstand being battered by waves on the ocean,” he added.

It’s partly the economics of it too, according to Nemes, who observes more and more people in the ‘gig economy’ wanting their own premises: “Studio builds can be a pain – for some it’s a labour of love but quite often people just want the outcome,” he said.

With a little help from some friends

On the other side of the coin is acoustics. A shipping container as an acoustic environment is, by default, disastrously bad. Half the time spent developing SpaceCrate over the last year has therefore been in isolation and acoustics. Nemes worked with acousticians like Howard Turner from Studio Wizard, along with Chris Walls and Tim Coombes from Level Acoustic.

“Chris oversaw all our design to get that room to a spec that you can work in accurately and send a mix out confidently,” Nemes revealed. “From an audio point of view, it’s got to work practically and also be somewhere that inspires people to spend days, weeks and months being creative. Those were the two hardest things to achieve.”

A lot of those in the gig economy are decentralising their offerings in that they may already have a client base but do not want to travel into a city to work. SpaceCrate serves as a potential remedy for this, providing users with the freedom to reach an outcome on their own terms, with optimised productivity.

“We’re not assuming anything about the duration,” said Nemes. “It might be used for a week, it might be for a movie, an album, a series, or an event or festival – or it might be for ten years.

“On the equipment side, there’s so many permutations – we don’t know what people are going to want or need so we do not provide kit,” he continued. “Instead it is ‘kit-ready’ – there’s cable management, power etc. all ready to plug gear into.”

Nemes also plans on offering SpaceCrate out through hire companies, who may want to pre-stage a particular setup, build and test it, and then ship the whole studio with kit to a client. There are lashing points inside the container so it can be transported with gear.

Currently, SpaceCrate is being used as an ADR room on-location for a major Warner Bros feature film, moving between sets in different locations along with the cast and director.

“It now seems to be that you can buy everything as a service, and you don’t really own anything in this field anymore,” Nemes concluded. “People subscribe to bits of software, they rent plugins; SpaceCrate taps into that with the transportability element and its versatility.”