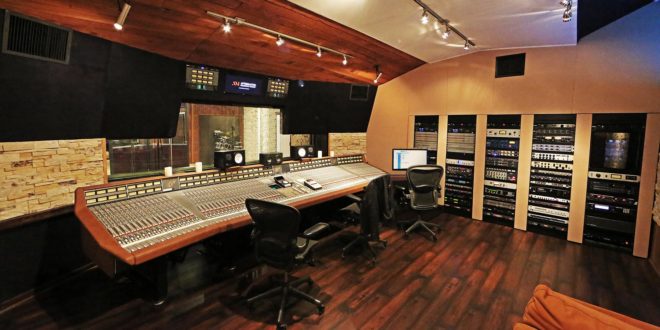 An iconic recording facility in the heart of Hollywood reopened its doors at the start of the year following a complete renovation, but to what extent has it preserved its incredible legacy and secured its creative future in doing so? Colby Ramsey investigates.

The new Aftermaster Studios Hollywood breathes life back into a landmark made famous by Crosby, Stills and Nash – one that was originally constructed by the latter almost 40 years ago in the former production offices of legendary director Alfred Hitchcock. Since it was first completed in 1978, it has been a recording and production facility for many of the music scene’s greatest talents, including The Eagles, Jackson Browne, B.B. King, and in later years, diverse artists such as Tupac, Fleetwood Mac and Good Charlotte.

The renovation team led by co-founders Larry Ryckman and Shelly Yakus has completely modernised the facility’s seven recording and mastering studios, future-proofing it for a new generation of artists and marking it as the fifth recording studio that Aftermaster Inc. operates at the historic Crossroads of the World compound on Sunset Blvd., originally built in 1936.

“It was a difficult decision,” Ryckman reveals. “Recording studios are closing down all over the world because of the ease and low cost of computer-based music production.” Yet it was the studio’s size, location and impressive 40-year history that ultimately won the Aftermaster team over: “We wanted to renovate and reimagine a true Hollywood studio and build a legacy facility that will hopefully be around for many more decades,” adds Ryckman.

The team, which includes a unique and very diverse group of engineers, producers, mastering engineers, artists and audio hardware specialists, has cumulatively produced, engineered and mastered more hit music than any audio company in the world, according to Ryckman: “The team behind Aftermaster are all purists that have come together in a never-before-seen (or heard) collective in the audio world,” he remarks. “The reason I raise this point is that the acoustics of the rooms were paramount, and it was very difficult to get so many great ears to agree on what sounded just right.”

Ryckman and the team ended up adding large amount of sandstone and proprietary acoustic materials so that the rooms met their audio requirements, yet like most projects, “it took more time, more resources and more effort than any of us expected.” The studio wiring, patch panels and the deterioration of the materials covering the walls proved especially challenging, along with the task of changing every work surface to reflect a modern recording environment. The control room features stained glass windows and specially designed acoustic walls, while the expansive live room is equipped with new bamboo floors, stone-accented walls and includes both a piano room and a vocal booth.

“We retained every piece of wood that was in the original studio, so it has a vintage and comfortable feeling,” Ryckman reveals. “Indeed, the ‘bones’ that Graham Nash built in the studio are very strong and provided an incredible basis for us to work with."

Since its recent opening, the studio has been booked out daily. The Aftermaster team held the first open house for producers and engineers on 1 June and were met with ‘fantastic’ feedback, according to Ryckman: “Our studios have always been “closed studios” and are only rented out occasionally as we need to use them for Aftermaster’s technical needs.”

What is it then that makes Aftermaster different from the competition? Ryckman is keen to make it one of the most seasoned audio technology companies in the world, by developing both its services and own technologies: “The studios and our professional mastering services set us apart from other audio companies as they keep us in the music game whilst still allowing us to develop products,” he says. “It’s been phenomenal watching the incredible changes taking place. I can remember talking to my partners Jimmy Lovine and Shelly Yakus 30 years ago about how there could never be a computer-based recording and mixing system that could get close to the real studio experience. Obviously, we were very wrong.”

In fact, Ryckman believes there were only about 15,000 recording artists in the USA back then, as music could really only be created by renting studio time and a production team. Times have of course changed with millions of artists now completing high-level productions at home: “Having said that, I personally don’t think there will be a time when a computer can replicate the emotion and magic that occurs when a group of artists are all playing their music in a great sounding room through a console and real hardware in the chain,” Ryckman continues.

“We are confident that the renovation of such a legendary studio at Aftermaster Studios Hollywood will result in one of the most important recording studios in the world,” concludes Ryckman. “The studio renovation and reopening is an important part of creating a new dawn for the music recording industry in Hollywood.”

At the heart of Aftermaster’s newly renovated control room sits an 80-channel SSL 4000 G+ recording console – originally built by NBC for Saturday Night Live – along with five racks of state-of-the-art gear built into the wall. This includes a ProTools 12 rig made up of a Prism Sound ADA-8XR interface, Apogee Symphony I/O, and Antelope Trinity and 10MX.

Along with a host of UAD, Waves and Antares plugins, a broad range of mic pre amps are available, from vintage Neve 1073 pre’s to Rupert Neve Designs’ Portico ll. Compressor/limiters and EQs from the likes of Teletronix, Neve and API are also in abundance.

Monitoring options include both Dynaudio M3XE speakers and Lipinski Custom 18” speakers backed up by Lab.gruppen PLM 12k44 amps, a combination that is somewhat unique to North America says Ryckman, “as we use both Dynaudio and Lipinski mains in our studios.” Near-field monitoring is carried out on Dynaudio MB5 and LYD 7 monitors, as well as Lipinski L-70s and the more commonly used Yamaha NS10s.

A plethora of musical instruments are also on offer, while recording can be carried out via one of the many microphones in the studio’s collection, which includes models from Telefunken, Neumann, AKG, Shure, Electro-Voice, Sennheiser and Audio-Technica.