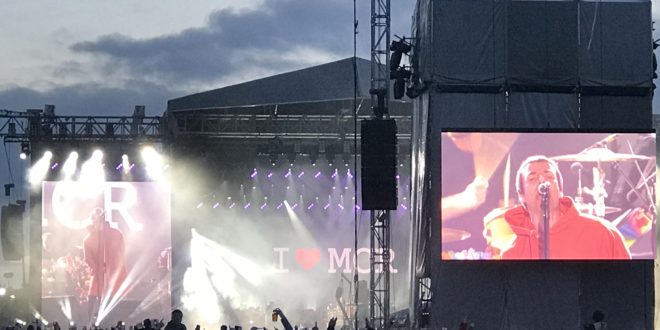 How the audio industry pulled together for One Love Manchester

Britannia Row Productions director Lez Dwight recalls how the company, with help from all areas of the business, managed to pull off such a huge and important concert with just a week of preparation.

“Just seven days before the concert was when we found out," said Lez Dwight of Britannia Row Productions the morning after the specially arranged One Love benefit concert at Manchester’s Old Trafford Cricket Ground on 4 June 2017.

“Clair Global’s office in the US were the contracting party for the Ariana Grande tour and when she decided to do the charity event after the Manchester terrorist atrocity they contacted us directly, sensing that this was going to snowball, which is exactly what it did.”

This was always going to be tricky; if nothing else Grande’s touring equipment was tied up in Manchester Arena for several days after the attack due to the police investigation. “We immediately arranged for extra equipment, mainly RF gear, mics and IEMs and two extra SD7s, to go into Wembley Arena over the Bank Holiday Weekend," explained Dwight. "Here, Ariana’s band, who would form the ‘house band’ for the One Love show, would rehearse. The additional gear was added to the tour FOH and monitor systems to accommodate visiting guest artistes and their engineers. Ariana and a couple of guests quickly expanded. By Tuesday it was clear this would be a multi-band show with a list of international stature touring artists.”

Of course, it was already an extremely busy time of the season for the production industry – Brit Row, which merged with Clair Global just one month ago, has stadium tours with Depeche Mode and Robbie Williams; Phil Collins kicked off his tour on the Friday night plus several other tours were out on the road. “The call on crew and equipment was a real challenge,” Dwight stated. “As the week went by we devised a plan, we had duplicate SD7s at both ends of the snake, much like the model we use for shows like The Brits and MTV European Music Awards; we also increased the SD Racks to up the channel count from 56 to 112.

"The ‘house band’ rehearsed till Saturday night while we arranged extra Clair Cohesion CO-12 PA to add to The Ariana Arena PA, which included delays to ship from us to Old Trafford and get set up on Friday. Saturday morning, we loaded in our Control followed by tests and check on site. Sunday morning started with an early planning meeting, then it was artist rehearsals right up to the point when doors opened. In fact, we still rehearsed The Black Eyed Peas after the doors opened. If you think that was tight, Liam Gallagher’s band played with no rehearsal at all. They just turned up and played, much like one of those ‘throw and go’ appearances at a festival. Fortunately, they shared the self-contained Coldplay control and monitor rig which made that a little less nerve wracking.”

“The show called on all our experience with multi-band shows, but even so it was tough. We scheduled in key people like [sound designer, engineer and audio consultant for live events] Colin Pink who had a couple of days off in the middle of Hans Zimmer’s world tour. Everyone stepped up and got stuck in. Digico, Sennheiser and Shure all supported us with equipment; Digico sent Mark Saunders and Dave Big while Sennheiser sent Jonas Næsby. I even I got my hands dirty. Thing is, the industry rose to the occasion, it was a really great team effort from everyone involved; Clair even flew over Jim Bowersox, a member of the CO-12 design and engineering team, to help tune the Manchester system; that’s classy.”

Just to add to the pressure, such was the significance of the show that the BBC agreed to a live broadcast. Curiously, this proved to be a blessing. “It was a mutual relief when the BBC turned up and we saw familiar faces like Toby Alington looking after broadcast sound. It’s very reassuring when broadcast and live sound meet up for something like this and you all know each other, and all know each other’s ways of working. When you’re very tired and under pressure that’s a big plus.

“The fact is the touring industry rose as one to support a really worthy cause,” concluded Dwight. “That is to be admired.”