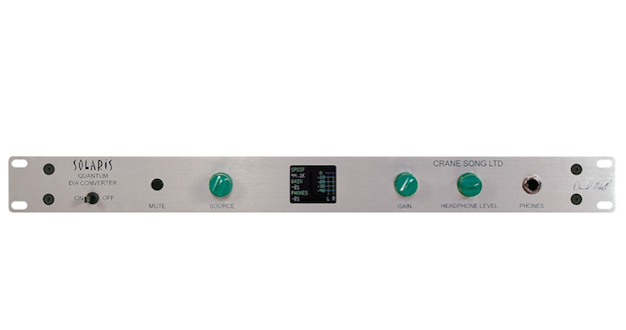 Wes Maebe takes this new D/A design from Dave Hill for a test-drive.

I first met Dave Hill from Crane Song and Dave Hill Designs around the start of the millennium at an AES show and was intrigued and blown away at the same time by his EQs, compressors and monitor controller.

Since then I’ve been using Crane Song hard and software on about everything I work on and one can’t help but be impressed with the precision of the engineering, the immaculate design and the sheer quality of the sound that comes out of the Wisconsin workshop.

Not just a pretty faceplate

Straight out of the box, the front panel shows the user those classic Crane Song colours: brushed metal grey and green controllers.

As it’s a standalone DAC there’s not a lot to clutter up the front panel. Nicely laid out across the front there’s the Power switch; the Mute button for muting the main output; a Source selector which allows you to choose between AES, SPDIF, Optical and USB; a Gain output level control; a 1/4” Headphone socket with its level control and in the middle sits the LCD display.

The I/O options on the back couldn’t be more straightforward. The AES runs on XLR, SPDIF on Phono, Optical goes in via Toslink and lastly, USB. In addition to the stepped main outputs, which incidentally deliver up to +24dBu, the Solaris offers an extra set of fixed outputs, set at +18dBu.

Before we dive into the guts of the box, we should have a quick look at what information the LCD display gives us.Once the unit is powered up and has gone through its boot up procedure, the function display shows the Source (SPDIF, AES, USB and OPTICAL), which is selectable with the Source encoder. This is followed by the auto-detected sample rate (up to 192kHz), Gain – again with its own dedicated controller – headphone level and the Left/Right output meters.

When you power up the Solaris and hold down the MUTE button until the red SOLARIS name switches to full black screen, you’ll engage the Setup Menu. This offers you the option to engage a 6dB PAD on the Main output. Simply select ON or OFF with the SOURCE knob and hit MUTE to exit. This pad will reduce the Main output to +18dBu from its standard +24dBu, making it an identical parallel of the secondary outputs.

So what makes this DAC so special? It’s all about that magic word: jitter, or lack thereof. The Solaris is based around a 32-bit ASRC converter which up samples to 211kHz in order to reduce that jitter. Jitter is commonly caused by an unstable clock. This unit’s reference clock’s jitter has been measured at less than 1ps (picosecond). When you combine that with the Crane Song proprietary re-construction filter you end up with around 44 femtoseconds within the auditory spectrum of 10Hz – 20kHz. To put it in perspective, this is the lowest published jitter spec in pro-audio to date.

So, what does all this geek speak actually boil down to? Plain and simple, after two years of research, the Crane Song Solaris delivers amazing transient response and stereo imaging, tight and super defined low frequencies and a crystal clear high end.

An ocean of options

As I mentioned earlier, the Solaris DAC is a flexible machine. That versatility allows you to customise its setup to your specific needs. Here are a few of those configurations I ended up using to test-drive the unit.

DAW monitor controller: When working entirely in the box, you will still want to benefit from top notch D-A and ultra-low jitter conversion. Hook up the Solaris to your DAW via USB, using the unit as your interface. The Solaris will convert your mix from the digital domain to analogue to feed your monitors.

On-the-go conversion and monitor control: There will be situations where you find yourself away from your studio setup needing to work on mixes. Solaris gives you that clear image you’ve been working with in the studio. Just plug in via USB and you’ve got your Crane Song sound feeding your portable rig. Take it a step further and feed the backing track mix to FOH and deliver the pristine sound to be part of the live performance.

Digital source switcher: You may have a few digital sources, DAW on USB, a playback device on AES, another one on S/PDIF and a third unit outputting Optical. You can now easily switch between the various formats.

Output Extender: This is how I ended up running the Solaris in my personal setup. You can use the DAC as your master output from the DAW and it can provide an extra set of analogue outs fed from your interface’s digital outputs. You can make the Solaris your DAC for analogue processing. So if you’re running a bunch of analogue outboard to process mix components you can feed them to the Solaris to convert them, process them and then record them back in through your A-D Converter. This way this box can also serve as your mastering DAC.

That NY Compression Trick: You’ve probably heard of NY or parallel compression, where you take a parallel feed of your drums and maybe the bass, EQ and compress them together and then blend that signal back into the mix. Of course you can approach this old school trick within your DAW, but there’s nothing like doing this the analogue way. Solaris’ dual output architecture allows you to do that. You buss your rhythm parts to the Solaris so you have level control on one set of outputs and then you can route the secondary outputs to your analogue parallel processing.

After I heard the Solaris for the first time, I knew I had to have it in my rack. Comparing the conversion to most of what’s available out there, the sound is so defined that it allowed me to work a lot faster and spend a lot less time EQing. You hear what you get.