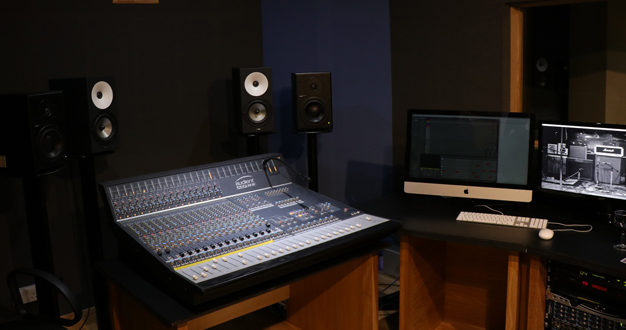 London College of Music – part of the University of West London (UWL) – has recently opened Paragon Annex Studio complex, an investment of more than £1 million in the development of seven new recording studios, each of which contain two new Audient consoles.

“Our current count is nine Audient desks,” said Richard Liggins, technical production manager at UWL. “That’s seven ASP8024s and two ASP4816s, plus a number of ASP510 5.1 monitor controllers and an ASP800,” which puts it in the running for the facility with the most Audient desks in the world.

With this latest enhancement of its existing provision, LCM’s studio complex just down the road from the UWL Ealing campus is now one of the biggest of its kind in the world.

“Audient desks reflect a very clear design ethic in terms of the signal flow through the desk,” Liggins explained. “We teach audio studio recording from first principles, and that means an understanding of signal flow through a traditional multi-track studio as a base for all other techniques in audio recording. The in-line architecture of the Audient range supports that teaching very well.

“We decided to standardise our main rooms onto a single platform some time ago, to allow better transfer of technique from the teaching studios, and to allow the students more time to concentrate on their recordings without needing to learn multiple platforms and workflows,” added Liggins. “We wanted to present a consistent approach for the students in the main studios, so the choice of an analogue console was made partly for financial reasons, but also because the traditional recording approach is the backbone of everything we do in audio teaching.”

As the facilities grow, so the courses evolve too. “We have just launched a multi-pathway variation of our venerable Music Tech Specialist BA (hons) degree, the students study a common first year, then specialise into a number of technique based pathways, including Electronic Music Production, Recording and Mixing, Live sound and Audio Post Production,” reported Liggins. “Interest has jumped by 300% at application and is holding up very well. We’ve been running studio degrees for 25 years, this is the next phase for us.”

Well over 500 students will find themselves in one or more of the University’s studios over the course of a year, with all specialist music tech students required to take a level 4 module in Studio Techniques, regardless of the course that they specialise in later in their studies, so the recording gear is certainly put through its paces. The Audient consoles were supplied by educational technology experts, Academia.