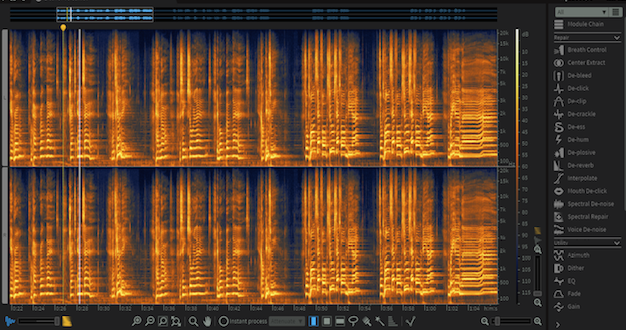 Simon Allen gives us his take on the latest version of the audio repair suite, which promises some significant updates this time.

Now on its sixth version and with a price tag for the Advanced option greater than some complete DAWs, this isn’t just a noise removal plug-in anymore. As a daily user of RX since version 2, I was really keen to check out the latest update and put it to the test.

There was a lot of hype around this release, giving the impression RX 6 doesn’t just have some neatly presented new features, but offers some fundamental processing advancements. I soon realised this was the case and any audio professional will appreciate the wizardry here.

Talk of the trade

Whenever I find myself in those all-too-common geeky conversations with other like-minded professionals, once you’ve discussed various EQ plug-ins, the subject of RX soon comes around. If you haven’t got to grips with this extensive software, well, where have you been?

I have used CEDAR hardware products before and other noise removal plug-ins, which still hold their merits, but iZotope has become the household name. On that note, I ought to mention that I still believe there’s a strong argument for DSP-based solutions with external hardware, including the ability for real-time processing in some post or broadcasting scenarios. There are some algorithms inside RX that use a surprising amount of CPU, which could be a consideration for some.

That said, although some RX algorithms require heavy processing power, the result is nearly always worth the wait. iZotope has ploughed so much R&D into RX that it not only sounds good, but is more efficient. RX 6 is no exception, with the latest modules benefiting from a new detection and processing method called ‘machine learning’.

I find the developments we’ve seen in RX over the years very timely. Historically, we’ve had noise removal tools, such as Dolby tape noise reduction, from very early on. However, I feel as if this technology is even more relevant today. Recording and filming budgets are generally much lower than ever before, with even tighter time constraints. You don’t always have the luxury of going back to the studio to re-record something, just because a car went past the window at the wrong time. Even working mostly in music as a mix engineer myself, I probably rely on RX more than any other bundle of plug-ins.

It’s all about detection in this game. If the software can accurately determine what’s the noise and what’s the source signal, then steps to remove that noise prove simpler. This is what version 6 is all about. If RX 5 was a software and front-end overhaul, then version 6 brings new and exciting detection algorithms.

iZotope has used this ‘machine learning’ to train RX to understand the nuances between the noise and source. My impression, even from my regular musical standpoint, is that post-production professionals are gaining more than they might realise in this release.

The new De-Rustle (which was conceived using machine learning, along with the Dialogue Isolate feature) and De-Wind (which wasn’t) modules are perhaps the most impressive. We all know how a rustling lavalier microphone can cause hours of work to become usable. Additionally, we all know how wind on a mic can damage the whole signal, not always being contained to the lower frequencies. Well, I have been very impressed at how RX is deciding what’s the dialogue and separating it from the unwanted noise.

This new technology has also given way to the Dialogue Isolate module. Until now, we’ve used noise removal tools to suppress noise, in the hope the dialogue becomes clearer. However, RX can now pick out the dialogue from a recording that might have complex and irregular background noises.

iZotope has clearly recognised the increasing number of users who are also employing RX software to clean up their music recordings. Version 6 adds a couple of refinements to the existing spectral De-Noise and De-Clip, as well as introducing new De-Ess and De-Bleed modules.

The De-Ess module, which users in post-production will also find useful, has to be one of the most sophisticated de-essers I’ve used. Using the spectral display, you can be sure RX is ?processing only the correct frequencies, to avoid the signal sounding over-processed. Then by setting it to output the ‘esses’ only, you can hear exactly what RX has detected as the offending ‘ess’ sounds. The results leave you feeling reassured that you haven’t sucked the life out of the recording.

Finally, there is the all-new De-Bleed module. It wasn’t until I started using and understanding this module that I realised the power available here. This module is designed to remove a signal that may have bled into another. The prime example would be headphone click track bleed into a vocal or instrument microphone.

We may have been able to remove click track bleed before with RX, but not quite as effectively, or anywhere near as quickly, as this module can alone.

De-Bleed goes further, though, which is a common trait that you discover when using RX 6 in a creative environment such as music production. The simple operation of the De-Bleed module is to provide it with the ‘active’ track and the source track (the source track containing the sound you want removed from the active track). Therefore, this tool can be used to virtually remove any sound from within another, provided you have the original to offer as a sample.

This opens up a world of opportunities such as isolating instruments recorded in the same room as one another for further mixing opportunities. I can see this module being developed further in the future, perhaps even isolating multichannel live recordings into its component parts with the touch of a button.

I was sceptical following what I considered to be a disappointing release from iZotope with Neutron, which also claimed to be smart. However, the detection techniques used in RX6 are truly impressive, paving the way for faster workflow and new possibilities.

Simon Allen is a freelance, internationally recognised engineer/producer and pro audio professional with over 15 years of experience. Working mostly in music, his reputation as a mix engineer continues to reach new heights.