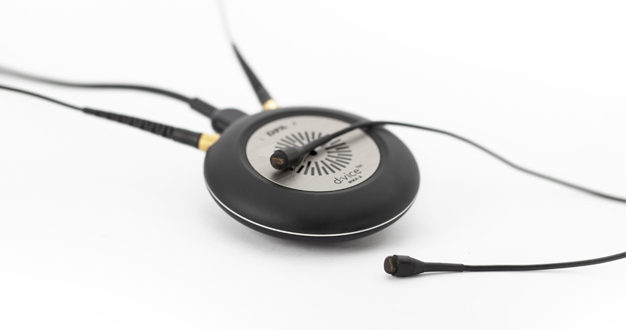 The d:vice is a two-channel microphone preamp and A/D converter offering mono, dual and stereo capabilities, with interchangeable lightning and USB cables for connectivity. It is aimed at live and mobile journalists capturing or streaming audio in the field.

MicroDot inputs allow the d:vice to be connected to all DPA miniature microphones, including the d:screet Miniature, d:fine Headset, d:vote Instrument and d:dicate Recording microphones with the optional MMP-G preamp.

At about two inches in diameter, the d:vice Digital Audio Interface is ultra-compact, easily fitting in the user’s pocket, and is controlled through a remote app on any iOS device. The app allows users to store gain settings and low-cut filters for ongoing and future personalised use in dedicated presets. Third-party applications can be used to accomplish specific tasks, including but not limited to live broadcast and high quality recordings.

“This is the first pocket-sized digital audio interface that can deliver sound that rivals studio recordings,” said René Mørch, product manager at DPA Microphones. “The d:vice Digital Audio Interface was designed with broadcasters and mobile journalists in mind, but can also be used by other content makers for recording music, filming on location and during both live and recorded broadcasts. With this interface, users can portably record and stream clear and professional audio from the connected microphones.”

The new DSM6000 Microphone Base from DPA will also be on show in Orlando. Designed to be placed on a table or podium, or attached to a ceiling or wall, the DSM6000 is available in two colours – Black and White – and comes with either a MicroDot connector, an XLR connector or unterminated leads for connections to Phoenix blocks. The d:screet capsule is mounted on a sleek boom that, for the tabletop version, has a gooseneck at the top and the bottom, which allows users to position the mic exactly where they want it. The ceiling version consists of one gooseneck. In both versions, the cable can exit to the side of or beneath the unit.