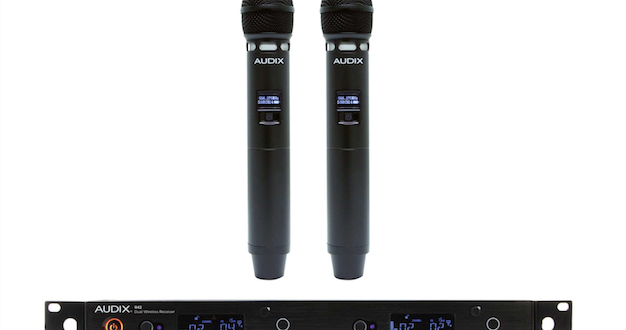 Andy Coules shares his thoughts on this versatile range of wireless systems from the American mic company.

The Audix Performance Series wireless system comprises various components and configurations, at the core of which are two transmitters – the H60 and B60 – and four receivers: R41, R42, R61 and R62.

The 1 and 2 in the receiver names denote single and dual units in half-rack and full 1U rack configurations respectively; the 4 and 6 denote the 40 and 60 series receivers, the specifications of which differ in terms of the width of the tuning spectrum (32 and 64MHz), the range (91 and 137 metres) and internal antenna management (diversity or true diversity). The H60 is a traditional handheld microphone transmitter, which can be combined with one of three capsule: an OM2 or OM5 dynamic or VX5 condenser. There are also various accessories including lavalier microphones, headworn microphones, instrument cables and antenna combiners, which can be combined in over 60 different configurations to cover a wide range of possible wireless use.

The receivers are housed in stylish black metal enclosures. On the front is a power button, as well as four control buttons and an LCD display panel for each channel, and at the back there’s balanced XLR and unbalanced 1/4in jack outputs for each channel, a power socket and a pair of BNC connecters (for antennas). All units feature two antenna connectors, the dual units utilising an internal antenna combiner.

For this review I was supplied with the AP42 VX5 E system, which comprises the R42 dual receiver and two H60 handheld transmitters. I was also sent a B60 body pack transmitter and a HT5 headworn condenser microphone.

The E in the name tells us that the system operates in the E band of frequencies, specifically 823-832 (channel 65) and 863-865 MHz (channel 70). Channel 65 was freed up in 2015 following the digital switchover and requires a licence for operation in the UK, this being the same UHF shared frequency licence required for channel 38 (I spoke to Ofcom to confirm this as the information online is unclear). Channel 70 doesn’t require a licence for operation and is licence-free across the whole of Europe, which is great news for those of us who are used to our wireless gear suddenly becoming illegal when we cross certain borders. The only issue is that it’s only a 2 MHz slice of channel 70, which limits the number of devices you can use in this range – not to mention the fact that those frequencies are likely to be very popular.

When I unboxed the system I was pleased to discover it comes with a printed manual, which I completely ignored as I connected everything up and turned it on. The clear bright white display on the receiver shows RF and AF signal strength, group and channel numbers, receiver lock, receiver gain, squelch, active antenna and battery level. Both transmitters use a pair of AA batteries with a claimed battery life of 14 hours indicated by a four-segment display (on transmitter and receiver), which denotes nine, seven and three hours of life as each segment disappears. When there are no segments left the battery indicator disappears from the receiver and flashes on the transmitter to let you know you have just one hour left. If the transmitter is turned off or goes out of range a red warning triangle appears at the top of the receiver display to indicate link loss.

Audix places a lot of emphasis on the ease-of-use of the system and I found it was indeed very straightforward to use; the menus on the receiver are very intuitive. All you need to do is hold down the up or down buttons and it will scan for a frequency that’s not in use. You then press the sync button and hold the transmitter’s IR window in front of it and you’re good to go, or as Audix puts it: Scan-Sync-Play. The display defaults to showing group/channel numbers but can easily be switched to frequency mode for those who like to know what’s going on under the hood; alternatively a quick tap of the Set button will also briefly display the frequency. There are ten groups of ten channels, which are grouped to prevent intermodulation issues. One thing that caught me out was the fact that when you change the group on one side of the dual unit it also changes the other side. This is of course completely logical as you would naturally want to operate multiple units in the same group, but that didn’t stop me losing a lock a few times while I was fiddling.

The H60 handheld microphone transmitter is black, metal and non-tapered with a stubby plastic antenna at the end. The display is small but conveys all you need to know clearly (i.e. frequency, group/channel numbers and battery indicator); there is a single button – a long press turns it on/off and a short press mutes the microphone. The mute function is completely silent – I couldn’t detect any noise whatsoever as it smoothly transitions. For those who are worried about unintentional muting during a performance, the mute function can be turned off via the receiver menu (which requires a re-sync to transfer the setting).

In operation the signal delivered by the R42 is very clear and free from noise – there was none of the hiss or interference you often get. I must say I was very impressed with the VX5 capsule – it has a very smooth, silky sound, which worked particularly well with a female vocalist, and it admirably handled a wide range of levels and consistently delivered a clear, crisp sound that required very little in the way of EQ. I’m pleased to say that the battery life was also as reported – I got just over 14 hours of use out of it in rehearsals and the display accurately reported the remaining time. This gave me the faith to run it lower than I normally would before replacing the batteries, which should enable more efficient use.

The B60 bodypack boasts the same display and features as the H60; input is achieved via a locking mini XLR socket. At first I coupled it with the HT5 headworn microphone. The wire frame is light and comfortable once fitted correctly – after a while I forgot I was wearing it. In use it’s unobtrusive and it picked up my voice brilliantly with an impressive frequency response, which rolls up from 20Hz to be pretty flat from 45Hz to 2KHz, then dips slightly at 2.5K and more so at 8-10k, which produces a clear, even tone while not being too sibilant. In addition to the same power/mute button as the H60, the B60 also has three buttons that allow access to the settings for RF amplitude (10 or 40 milliwatts) and gain (0, -6 and -12dB) – the same settings are accessed via dip switches inside the H60. Using the instrument cable (a 1.4in male jack to mini XLR) I hooked up a guitar and again I was impressed with the clarity of tone and minimal noise – it was almost as good as a high-quality cable, and definitely one of the better guitar tones I’ve heard on a wireless system.

In the Performance Series Audix have produced a versatile high-quality wireless system at a competitive price, which is likely to give the “other two” wireless manufacturers a serious run for their money. It sounds great on a wide range of input sources and delivers a clear noise-free signal while being incredibly easy to set up and maintain.