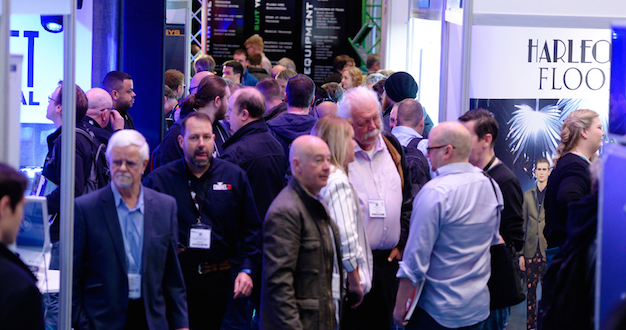 After its annual Leeds event drew to a close on Wednesday 10 May, PLASA has reported high levels of enthusiasm from the industry that it says proves how the show’s Focus formula remains "a perfect fit."

As well as being the ideal platform for many UK debuts of new products, the show also offered multiple networking opportunities and a seminar programme that combined expert-led sessions and hands-on training.

Johan Gunsing of Adam Hall Group stated: “For us, PLASA Focus Leeds allows us to meet existing and new customers and actually have time to talk. The show has really good attendance and for us attracts the right target group.”

The busy showfloor was complemented by a rich programme of content that saw PLASA collaborate with manufacturers, venues and industry associations to deliver sessions designed to inform and inspire visitors.

The new K.2 series speakers from QSC could be found on both the AED (pictured) and Leisuretec stands

“We had a particularly great panel session, including Professor Doug Jones who represents Danley Sound, who flew over from Chicago specifically to do the panel which is fantastic," said Ward. "PLASA shows are the place to be for the technical discussions at the highest level and are an excellent forum for them. We will be building on these in-depth sessions for a topical programme at PLASA Show in London.”

Following a successful event at the 2016 PLASA Show in London, this year’s Leeds show hosted a free training event for visitors to learn more about Dante networking. The event included presentations, training workshops and demos of Dante-enabled products from d&b, Focusrite, Roland, Bose and Out Board (TiMax SoundHub).

Director of PLASA Events, Christopher Toulmin, commented: “It’s hard to believe next year is the tenth anniversary of PLASA Focus Leeds and we’ve got some exciting things planned. We’ve taken on additional outdoor space at the venue where we will be hosting audio demos. The area is normally used as a jousting arena – so this is a truly unique opportunity for us! We’ll also use the space to create plenty of outdoor experiences, including things such as pyrotechnics.

“But for now, we immediately turn our attention to our flagship PLASA Show in London Olympia on 17-19 September. We’re looking forward to really driving it forward following last year’s move to London Olympia; we’ve got more audio exhibitors joining us and visitors can expect more exciting content than ever before.”