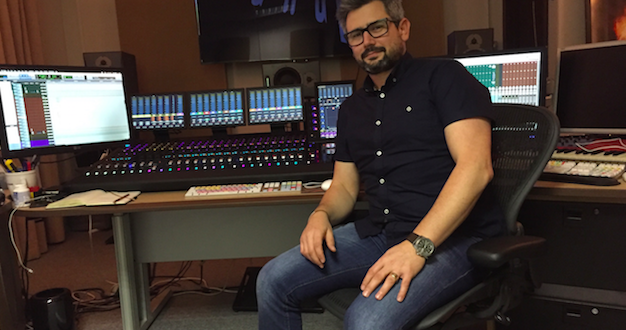 Sound designer and re-recording mixer Niv Adiri on how he utilised Nugen Audio’s Halo Upmix tool during the making of T2 Trainspotting.

Sound design and mixing is something that has always come naturally to Niv Adiri. “Growing up in Israel, I knew at an early age that I wanted to work with sound. It’s a passion that’s stayed with me ever since,” he says.

Through his career, Adiri has seen technology evolve to become a true enabler of the craft of sound for films. He cites recent technology advances, such as the ability to mix using digital audio workstation systems like Avid Pro Tools. “Instead of technology dictating how we do our jobs, we’ve reached a point where we can harness technology to our benefit – we can still be creative but we can work more efficiently,” he says. “These tools give us a single protocol for developing sound on a project in one session and on a single machine, which helps tremendously and accelerates our turnaround on changes that come in at the last minute.”

Adiri cites an example from his latest project: “In mixing the music and sound effects for T2 Trainspotting, we were able to develop the sound from beginning to end in one session. It meant we didn’t have to start from scratch when edits came in – we could pick up where the producers and directors left off the last time,” he explains.

One of Adiri’s requirements for T2 Trainspotting was the creation of a surround 5.1 version of the music – a task that was accelerated using Nugen Audio’s Halo Upmix plug-in. With Halo Upmix, he was able to work from stereo source tracks to deliver a 5.1 mix that was true to the original sound of the music but also sounded ideal in a surround environment.

“The Trainspotting music was naturally very percussive and rhythmic, which can present problems when creating a 5.1 mix. The surround needs to be tied as closely as possible to the source so it won’t sound diffused in larger rooms. That means it needs to be very tight without the slightest little delays — the last thing you want is short reverb, fusion, or ambience reverb,” he explains. “I had some experience with Halo before and knew it could provide the tightest output compared to other tools I tested.”

Adiri adds that Halo Upmix supported him creatively, as well. “In the upmix, the basic shape and treatment of the music was there, and Halo helped me improve it even further. I was able to find just the right combination of reverbs and slap delays. But most importantly, I was able to create a 5.1 mix that is really enveloping, with music that surrounds the listener and fills up the room in a close way without sounding too distant. That’s the type of effect that Halo enables.”

On an upcoming project, Adiri is looking forward to trying out the 9.1 option for Halo Upmix, which includes overhead positioning and generates a 7.1.2 (Dolby Atmos) bed track-compatible upmix. “In this next project I’ll be using Halo to go from a stereo mix to 7.1 for the music and sound effects, and I’m looking forward to experimenting with the overheads.”

With the 9.1 Halo option, Adiri knows he’ll be able to work closely with the Nugen team. “From my first few experiments with Halo, it’s been really refreshing to work directly with the Nugen Audio founders. Paul Tapper has been extremely generous with his time, and he’s made himself available to explain the logic behind the algorithms and give insight into how the tool works. With technology solutions, you can’t take for granted that the person who answers the phone will be able to tell you what’s going on inside the tool. But Nugen Audio is the exception. It’s tremendously helpful to be able to have a chat with the guy that actually wrote the plug-in’s algorithms.

“Halo Upmix is a brilliant addition to my toolset. It’s become my go-to plug-in for creating surround upmixes, especially for music that’s more electronic, rhythmic, and percussive. It’s the best way to go to surround when you have only stereo sources for music.”