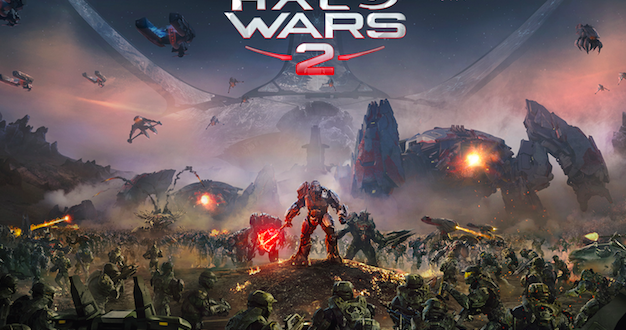 Colby Ramsey finds out how the audio team behind Microsoft’s latest RTS hit ‘Halo Wars 2’ came up with an explosive audio mix to match its stunning visuals.

As advancements in technology are made and audio quality in entertainment mediums continues to improve across the board, a greater awareness of sound amongst creative communities is becoming more commonplace, with people quickly realising the power of immersive video game audio in particular.

For Halo Wars 2 – a new real-time strategy (RTS) video game for PC and Xbox One developed by Creative Assembly and 343 Industries, and the latest instalment in Microsoft’s sci-fi Halo franchise – the audio team at Creative Assembly, best known for their work on games like Total War, simply wanted to make “the best sounding RTS we could.”

In an RTS game, the player controls a disembodied camera that can move quickly around a map or playing area. The player is required to manage various aspects of the battle, whether it is resource managing, base building, conducting a skirmish, or assaulting an enemy base.

“We needed to convey a sense of scale with these big battles and environments, supporting action-heavy gameplay with really exciting audio,” says sound designer and Halo Wars 2 audio lead Sam Cooper. “We tried to learn as much as possible about how to do that as the game was developed.”

With a lot of the gameplay taking place off screen, it was extremely important that the game’s sound really communicates the action in many different ways, from many locations around the map. “That was a big focus for us, in addition to creating a sense of immersion and excitement with the sound design,” Cooper adds.

With many of the sounds in the game – especially weapons and explosions that are heard from quite a long distance across a map – two versions of the same asset were created: a close perspective and a distant perspective, the latter of which was altered to achieve this distant effect while also retaining the characteristics of the original sound.

“This was in addition to using our middleware to filter and attenuate the sound,” explains Cooper. “The objective being that you hear sounds in the game from a long distance away but they are still recognisable as particular weapons from the Halo universe.”

A change of scenery

The mix for Halo Wars 2 is driven by a number of systems that shape what the player hears depending on gameplay context, “which was one of the biggest challenges for us to get completely right,” according to Cooper. In the game, the player could be focusing on a quiet section of the map in one moment, and then zip over to a much more intense and explosive encounter. “In the quieter moments you’re hearing more subtle, ambient environmental audio, maybe some chit-chat between marines, some Foley etc. whereas during a battle, it’s complete carnage,” Cooper remarks.

“In this context, our mix systems need to consider the size of the battle, which weapons and how many of them are firing, that sort of thing,” adds Cooper. “We use all of that information to drive volume and EQ adjustments on the fly, in order to keep control of the soundscape and ensure that the player hears the most important things at each moment.”

Every sound in Halo Wars 2 fits within a priority band, and each one has got volume and EQ inserts sidechained to various other high priority output busses, resulting in a mix that is constantly altering depending on the context. “There are a lot of sounds competing for space in the mix sometimes so we had to deal with it in an adaptive way,” Cooper explains. “A lot of iteration went into finding the sweet spot for the player, while also keeping the mix de-cluttered.”

Some experimentation also took place with regards to the game’s new faction, The Banished – a post-apocalyptic race whose sound design needed to come across as sci-fi but not too shiny and polished. This meant that Foley for The Banished was recorded with leathery materials, loose metal plates and chains in contrast to the familiar UNSC human forces that wear more high-tech materials, requiring Foley with more plastic, synthetic fibres.

“We actually did a fair amount of custom recordings for this project,” notes Cooper. “A lot of rocky, desert environmental sounds were recorded in an old lime quarry, while a lot of jets, helicopters, tanks and firearms recordings we did ourselves.”

Cooper was also part of the Alien: Isolation team two years ago, which as a survival horror game, is a lot more atmospheric and slower paced than his latest project.

“The sound design aesthetic there is centered around building tension and fear, whereas in Halo Wars 2, there is some tension, but it’s more about the big spectacular battles and exciting audio that accompanies them,” Cooper explains. “In this respect, we were able to be a bit more bombastic with stuff, with certain sound effects like special leader powers often blasted out in full over-the-top surround sound.

“Alien: Isolation was more narrative-driven, so in terms of the mix, we could script mix alterations really carefully around key story moments, whereas in Halo Wars 2 the gameplay is emergent and changes really rapidly,” he adds. “So it was a lot more about building up the tech to support these adaptive systems.”

The audio team at Creative Assembly make use of an RME Fireface 800 interface along with Dynaudio BM14s and BM6a MKIIIs, while their recording options include Sennheiser’s MKH 416 and 8040 shotgun microphones along with 744 and 702 audio recorders from Sound Devices. Additionally, they used Nuendo 7, Waves Platinum and a range of FabFilter plug-ins to satisfy some of Halo Wars 2’s more experimental audio elements.

Cooper goes on to describe the “great collaborative relationship” that Creative Assembly maintained with the other teams and individuals involved, including 343 Industries and Paul Lipson (vice president – creative services Formosa Interactive) who was “key in working with us on the audio vision.”

“He’s an encyclopedia of Halo franchise audio knowledge,” Cooper recalls. “He was able to tell us how specific sounds were designed in previous Halo games, and also where our boundaries were in terms of divergence from certain core, signature sounds from the Halo universe.”

Relying on dialogue to feed a lot of important information to the player meant that the dialogue system in Halo Wars 2 was huge, and took a lot of iterating to get into shape, as Cooper explains: “The system is very context-sensitive, so it was tricky finding the balance while prioritising sounds for the player to hear and mix that on the fly.”

Another thing that took a lot of iterating to get right for Halo Wars 2 was the reverb system. In terms of environmental sound, Cooper and the team spent a long time brainstorming how to represent reflections in the environment: “We ended up going for a three-tiered system that generates early reflections from the reverb zones around the larger structures in the environment,” he reveals. “That’s all knitted together with a global combination reverb that helps it all gel, and makes the action feel immersive and grounded within the environment.”

Creative Assembly collaborated closely with the external music teams, including a company called Finishing Move who specialise in electronic sound design composition, and they came together with composer Gordy Haab – who creates big cinematic orchestral pieces – to create “an awesome hybrid soundtrack that is very Halo, but also quite unique to this game in particular.”

With video games now reaching more mature audiences, some of which have grown up with them from a young age, players are naturally becoming more aware and demanding of certain game elements, including sound design. Cooper recognises better than most the importance of creating big cinematic mixes for video games, which is why so many would agree that the audio for Halo Wars 2 delivers on its promise to be as immersive and explosive as ever.