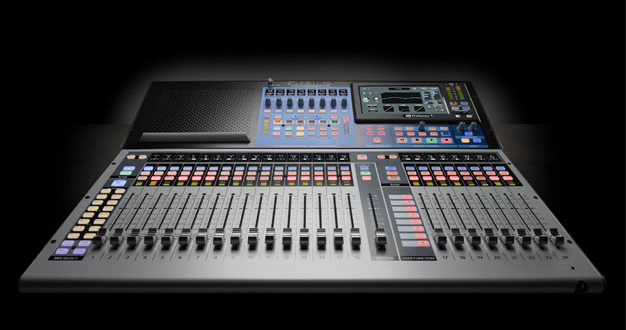 PreSonus Capture multitrack recording software with virtual soundcheck is installed directly into the StudioLive 24 console so users can leave their laptop at home. Up to 34 tracks can be recorded to the console’s onboard SD recorder. When finished recording, a Capture session can be opened in Studio One Artist for Mac and Windows (included), and the entire mix scene will transfer to a Studio One session, including fader levels and Fat Channel settings.

Scenes can be extensively customised, including a Scene Safe feature that prevents a scene change from altering the settings on designated “safe” channels. Similarly, Fat Channel presets have, for practical purposes, become like scenes for individual channels, saving input and Fat Channel settings as well as aux send and bus assignments. In addition to four fixed subgroups, StudioLive 24 offers 16 FlexMixes that can be individually designated as aux, subgroup, or matrix mixes, for a total of 20 mix buses, not counting the main mix, effects mixes, and solo buses.

An AVB Ethernet connection lets users stream up to 55 channels of audio to and from a Mac or Windows PC. AVB networked solutions, including stage boxes, personal monitor mixers, and increased third-party AVB interoperability, are coming later in 2017. 40×40 recording is also available via USB 2.0, while a separate 1Gb Ethernet port can connect to a wireless router or directly to a computer for remote control of virtually all features via a wired or wireless connection.

An extensive suite of software also comes with the StudioLive 24, including the Studio Magic Plug-in Suite for Mac and Windows, which includes seven popular plug-ins in VST, AU, and AAX formats. StudioLive 24 is expected to be available in the second quarter of 2017, with a US MAP price of $2,499.95.

Previous NAB 2017: MNA on board for IP Showcase
Next How To: Producing immersive audio for VR