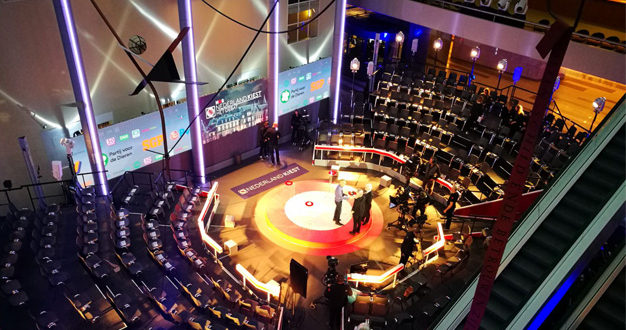 A live televised debate ahead of recent national elections in the Netherlands saw 14 of the country’s top politicians wearing DPA d:fine in-ear broadcast headset microphones in order to capture and transmit every word spoken.

The company’s d:fine mics are designed for broadcast hosts and guests who use in-ear monitors to communicate with their producers backstage or to hear foldback from people interviewed outside the studio.

They were chosen by Dutch news channel NOS, which broadcast the debate to an audience of over two million people, because all the politicians on stage needed to hear each other speak, while presenter and host Rob Trip needed an in-ear solution to listen to and communicate with producers backstage.

NOS and United, the company responsible for the broadcast audio mix, took advice from long-time DPA user Hendrik de Winter, of Winter Audio Service. He recommended the d:fine in-ear solution and the microphones were sourced from live broadcast specialists Ampco Flashlight Rental. A total of 16 headsets were supplied – one for each of the 14 politicians (including prime minister Mark Rutte), one for Rob Trip, and one spare.

“The debates took place in the central hall of the Dutch Parliament building in the Hague. This is a venue with notoriously poor acoustics so on-stage monitors were not an option,” explained Rogier van Ganzewinkel, Ampco Flashlight’s project manager. “In terms of aesthetics, the headsets worked well because they were so small and discreet, plus they fitted any head size and could be used by people wearing glasses and earrings.”

Van Ganzewinkel adds that everyone was impressed by the quality of the in-ear monitor, which is an integral part of the in-ear headset’s design.

“The in-ear headsets worked perfectly and there were no sound issues,” he continued. “The presenter and the politicians were very pleased because they could hear all the off-stage directions and talkback. They also commented on how comfortable the headsets were and how quick and easy they were to fit.”

The Dutch elections took place on 15 March and when all votes were counted Prime Minister Mark Rutte’s centre-right, liberal VVD party once again took charge after winning 33 seats and becoming the largest party in the Netherlands’ 150-seat Parliament.