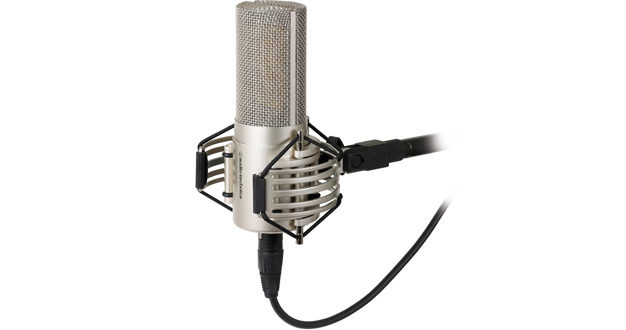 Audio-Technica has announced a new addition to its flagship 50 Series studio microphone range – the AT5047 cardioid condenser model – at Prolight + Sound 2017.

Based on the distinctive four rectangular diaphragm design of the AT5040, the AT5047 is a cardioid condenser with a transformer-coupled output that ensures high SPL handling without the risk of overloading mic preamps or console inputs.

With its ability to cope with wide variances in dynamic range, the new model is designed for high performance on vocals and a range of musical instruments.

Like the rest of the 50 Series, the AT5047 is crafted from aluminium and brass, with an advanced internal shock mount that decouples the capsule from the microphone body. The custom-designed AT8480 mount, included with the AT5047, also ensures isolation from knocks and transmitted vibrations in the studio. Supplied in a hard-shell carry case, the AT5047 has a RRP of £3499/€3999 and will be available in Europe from summer 2017. Audio-Technica is exhibiting at hall 4.1, stand E27 at Prolight+ Sound 2017.

The show will also feature a new product from Audio-Technica distributed brand Apart Audio in the form of the REVAMP8250 eight-channel power amplifier (pictured below).

The company’s new power amplifier is designed to be the most versatile class-D model in its line-up. Combined with a pre-amplifier or matrix, the REVAMP8250 can be used to create up to eight zones in mono, four in stereo or even four bridged mono/two bridged stereo. The amplifier has a variable speed cooling fan, input overload LED on the rear and an amplifier clip indicator on its front panel.

With its high channel count, the REVAMP8250 is ideal for situations where a limited number of amplifiers are able to be specified for reasons of either space or budget, without compromising on audio quality or flexibility. Apart Audio is exhibiting in Hall 3.1, Stand A54 at the show.

Allen & Heath’s compact dLive C Class digital mixers are also making their Prolight + Sound debut at this year’s event, while Portugal’s Artnovion – distributed by Audio-Technica in the UK since the beginning of 2017 – will be showcasing its latest absorption, bass trap and diffusion products.