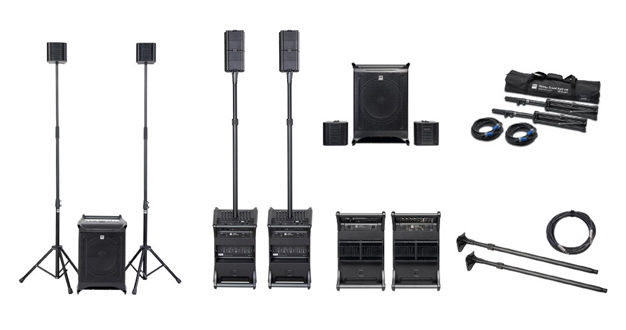 HK Audio has introduced four new LUCAS NANO 600 series system sets designed to give users all the compact stereo PA power and accessories they need in a ‘convenient, price-saving package.’

In total, the 2.1 Stereo Systems, which encompass an active subwoofer and two satellites, deliver 460 Watts of power at 130 dB SPL and weigh in at just 22.7 kg/50 lbs.

Meanwhile, the two Twin Stereo System packages – which deliver 920 watts of sound for crowds of up to 200 – feature two LUCAS NANO units plus a stereo link cable and two of HK Audio’s S-Connect Pole LN signal-routing speaker poles. Each of these systems, which include two active subwoofers and four satellites, weigh in at 34.9 kg.

“Life is stereo, so it’s only natural that we offer our LUCAS NANO users the easiest, most affordable way to a full-on stereo PA setup too,” said Rüdiger Forse, HK Audio’s senior product manager. “These new stereo packages are a breeze to transport and setup, and their superior, room-filling sound quality – all thanks to our decades of German engineering experience – will get any party started!”