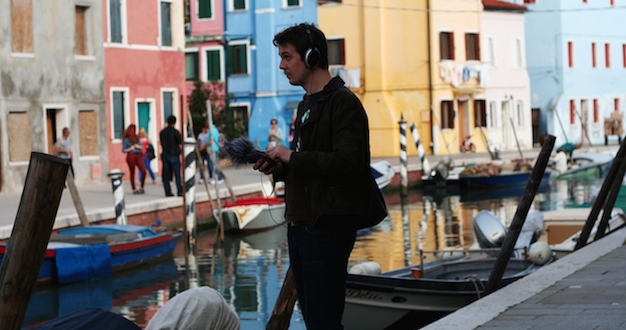 Colby Ramsey catches up with sound recordist Stuart Fowkes, founder of the global field recording and sound art project Cities and Memory about its largest and most ambitious collaboration yet, which saw scores of contributors provide original and reimagined sounds of ‘Sacred Spaces’ from all over the world.

Could you tell us a little bit about what Cities and Memory is, and where you got the idea for it?

My background is a musical one that mainly comes from playing in a number of different bands over a period of ten years, most of which involved taking field recordings and sample sounds and making something new out of them, and putting them back into a musical context, constructing everything out of source material.

With one band, everything we did was themed around nautical stuff, so we worked and did field recordings in a few coastal locations (sea, lifeboats, radios etc.) and then put that back into the context of songs. One day I was trying to work out what to do with this huge bank of sound recordings that I’d accumulated, and the idea for Cities and Memory came from there, which is what I completely focus my time on now.

So how did it all come together?

It was a combination of things at the same time really. I had this big pile of sound recordings, and was also at the time getting into sound mapping – of which there were a few online – but I knew if I was to do it myself I would have to bring something new to the party.

One of the things I decided to do composition-wise was take field recordings and blend them together to create a place that couldn’t possibly exist, but sounds like a feasible soundscape; like something that is real. I then realised it would be good to tie the two together and came up with this idea of a sound map, where you’ve got the original field recording and this reimagined or remixed version, which takes whatever seems to be the outstanding feature of the field recording and works with that to create something new.

How did you get it off the ground and why do you think it is important to get people to collaborate on these community audio projects?

It’s hugely important that the project has always been open from the word go, because of course, I can’t get round to 60 different countries myself in that time so I need the input in order to gather these global sounds. In terms of the reimagined side of things, anyone can contribute a recording from their mobile phone or handheld professional field-recording device and then remix it – it makes the project that much more exciting and it really taps into this open-source culture online.

The field recording community is super collaborative and supportive, so as soon as I got involved with the project and did the initial groundwork to get the word out – which wouldn’t have been possible six or seven years ago – the word spread quite organically about it. As well as doing the creative stuff myself, I can also act as a facilitator between people worldwide, which is really nice. Someone in New Delhi might send me an original field recording and then a sound artist who lives in San Francisco can create an entirely new piece of music with it.

Sacred Spaces is the biggest Cities and Memory project to date. What made you decide to go down this route?

There were a couple of things that inspired me with Sacred Spaces. The Churches Conservation Trust got in touch with me and asked if I’d be interested in going round to some of their properties, as they renovate and restore churches across England in quite obscure, rural locations. They were willing to let me go ring the bells and play the organs myself, which was a great opportunity and really produced some fantastic sounds. But I didn’t want to just confine it to England – it felt like a much bigger opportunity to me.

Then there were the wider contexts, including the element of making people socially conscious about sound. Soundscapes are constantly changing or disappearing, and natural sound habitats are being lost through traffic noise, construction or whatever it may be. We need to be aware of the sounds that surround us and recognise that they’re valuable, and to think about how we can preserve and protect them. Sacred Spaces are everywhere and they should be treasured. It’s a combination of the fact that these sounds are beautiful while it’s also another opportunity to talk about their history and this ongoing battle with intruding sounds.

What are your thoughts on the rise of sound mapping?

Sound maps have really exploded over the last few years with things like the London Sound Survey. However, there are also much more niche examples where people have challenged themselves with mapping their own city, and there are lots of other nice little takes on things.

For me, the role of the sound map comes down to what I mentioned earlier and that is people’s appreciation of sound in the world around them, because it is quite often taken for granted. If a block of flats are built in front of someone’s house or a landmark in the town is knocked down people are going to complain about it. With sound, people often don’t think about the effects that a particular change will have until it’s too late. I think sound maps really help us to listen to the world a bit more closely and cherish what we’ve got before it’s gone.