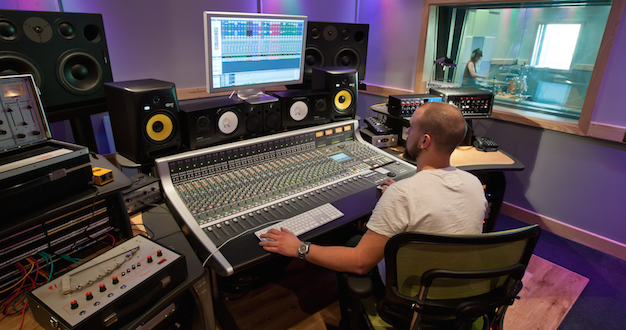 A year after it came under new ownership, Colby Ramsey headed over to The Park Studios in Wembley to find out how it is building on its identity and setting itself apart within the UK recording scene.

As a music production studio based in London, maintaining a competitive edge in such a crowded market can sometimes prove to be an ongoing battle. The Park Studios, based around Wembley Park in North West London, has achieved this and more since a new owner and head engineer relaunched the business just over a year ago, however.

Tobin Jones, an experienced sound engineer who had been based at Metropolis Studios at the time, worked on sessions at The Park for five years prior to taking the reins and assuming responsibility of the studio’s day-to-day running in January last year. Originally from Dorset, Jones began his audio career with a local PA company and ended up working with live crews on festivals in the West Country. After moving to the capital ten years ago, Jones completed his degree in audio engineering and subsequently worked at Metropolis in a number of capacities.

“It’s been hard work but it’s gone really well and has definitely been worth it,” says Jones. “There was a lot of support from the music community that I’m involved in when I relaunched the business. Last year was the busiest year I’ve had working in audio.”

Jones is proud of the community vibe that he has established at The Park in terms of the artists that record there as well as the studio itself, and while there is quite a bit of competition in terms of other music studios in this part of London, Jones says he makes sure to maintain very good artistic relationships with everyone he works with, using the studios as an extension of his particular interests and his passion for the industry.

“Because of that I work in quite creative, experimental types of music like electronic, rock, psychedelic, and a lot of noise-based music,” he remarks. “People will come here to do pop or hip hop music, but might request something a little bit more experimental or edgy in the sound. We do have a bit of a niche here as returning clients tend to be from certain labels or independent scenes.”

The priority for Jones is to ensure people feel comfortable enough to express their creativity at The Park, and feels that it is important to make sure they do not feel like they are entering an office or business environment. “Artists have to feel relaxed and inspired to produce the best recordings. I think that’s a big part of the whole ethos of this studio – It’s somewhere people will want to hang out,” he adds.

Jones’ notable projects from last year include a record on XL Recordings for Powell, who he describes as a genre-breaking artist with a very unique sound. After collaborating on a very well received piece of work, Jones will be teaming up with Powell again in 2017.

Jones also in November finished working on a ‘psychedelic noise’ record for a band called Swedish Death Candy, for which he tried a few unusual things with some everyday instruments to give a psychedelic edge. Around half of that particular record was recorded downstairs in The Park Studios’ lounge room, which is acoustically very different from the live room, utilising a number of reflective surfaces for a more raw, unrefined sound.

“It’s nice to have the flexibility especially when working with artists who are keen to do something slightly different to the norm,” Jones explains. “It’s always quite exciting when you do something like that with an artist because it gets everyone quite invigorated and the creative juices flowing.”

Jones tries to make sure that he is truly versatile as sometimes he will handle engineering and production, whereas other times someone will come in to produce and he will take more of a backseat role. “I think a big part of this is being approachable and mouldable to whatever the session may be,” he adds.

In the main control room Jones uses a Solid State Logic AWS 900+ SE desk, which he says integrates very well with his Pro Tools 10 HD and HD 5 rig. For monitoring, there are Dynaudio M3s and Yamaha NS10Ms with a Bryston 3B amp, as well as KRK Rocket 8s for nearfields. Jones also has a whole host of preamps in his arsenal, including Neve 1073s, API 550b EQs and a number of vintage Telefunken pres.Meanwhile, some familiar recording options are available, including Neumann U87s, Coles 4038s, AKG’s C414B XLS, Sennheiser MD421 and a recently acquired Placid Audio Carbonphone, which Jones describes as a carbon granular microphone with a warm, gritty sound.

A more unusual piece of kit that can be found in The Park’s main studio is an Analogue Systems RS8500 modular synthesizer (pictured, below). According to Jones, only four of these configurations have ever been made, and this particular unit is similar to the one that was originally built for Jonny Greenwood of Radiohead.

“The person who actually built this studio is from Cornwall and grew up on the same street as the guy who built the synth so that’s how we’ve ended up with it,” Jones recalls. “The beauty of the modular is that I can work my way around it, but it’s never the same. I can leave the patch after a days work and the next day it will sound different. I’m definitely discovering new things every single time I use it. I find it quite exciting when a studio has a few quirky unique bits of kit that are hard to find elsewhere, so I like the fact that we’ve got a few bits like that.”

In terms of the studio itself, Jones is keen to build on its already strong foundations, and continue to be engaged with the music community as an active member of the creative scene. He believes that it is vital for the survival of music studios for people to have somewhere to go to be creative rather than just sitting at home mixing, which is gradually becoming a more common occurrence.

Despite only being in charge for a year, Jones already has plans to build another production studio at The Park. While two bands use the rear rehearsal room downstairs three or four times a week to write music, Jones is looking to build another space that can be dry hired to someone who could “be included as part of our hub.”

“My assistant Lucas is a budding engineer and fantastic musician himself,” Jones remarks. “There’s a music college down the road in Kilburn and I know quite a lot of students there through the local music community. It’s about nurturing and being supportive of local talent. What’s good is that it’s all been natural growth all achieved through word of mouth.”

While it remains a rather uncertain time for the music industry, Jones is excited about the constantly evolving landscape. “We’re a big enough studio to attract some fairly big artists but we’re small enough to keep our overheads lower than that of the bigger studios,” he explains. “In this sense we can cater to people whose budgets might be dropping and we can still survive.”

In terms of business, Jones sees this as being more sustainable in the long term for studios, and enjoys seeing a lot of young artists who are trying to be really creative with their music come through the door.

“As a studio I feel like we really need to continue to build on our identity within the music industry, being progressive within the creative community and maintaining our niche,” concludes Jones. “I don’t think there’s ever been a better time to make music; how you make that work as a living is the difficult part.”