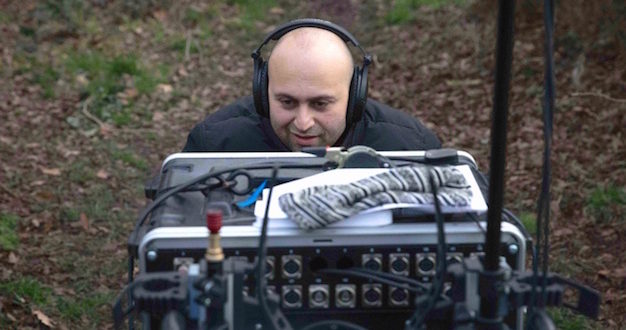 During production, Albermaniche (pictured) used SMV, SMQV, HM, and IFB transmitters and venue receivers to capture hours of close-up breath sounds from the leading actors, to help intensify the drama of the story.

Director Marc Munden picked up on Coltrane’s laboured breathing during weeks of rehearsal for the drama and was excited to capture it to communicate the character’s stress. “We spoke with the writer, Jack Thorne, and he added the influence of the breaths, the fact that Robbie is quite a big man and struggles to get up and walk, into the script,” reported Albermaniche.

The costume department sewed Sanken COS11 lavalier microphones in combination with Lectrosonics SMQV transmitters into Coltrane’s clothes, Albermaniche explained: “We recorded over four and a half hours of Robbie’s breaths, in sync, naturally on the shoot. We used them all the way through, to create an additional layer of detail.”

For a crowd scene filmed at the annual BAFTA Awards ceremony, Albermaniche deployed his full complement of Lectrosonics equipment, including an Octopack and a pair of venue receivers plus SMV, SMQV and HM transmitters.

He also hid Lectrosonics transmitters and Sanken mics in the costumes worn by Andrea Riseborough, who plays Coltrane’s daughter. “We hid the transmitters in her costumes and she didn’t even realize that she had them on,” said Albermaniche. “The Actors embraced having an SMQV on them at all times and with their reliability you know you can capture everything without any issues.”

“To have an influence on the storytelling sonically is something I had never experienced before. Director Marc Munden was incredible in ensuring we get all those unique moments and was pivotal in ensuring sound was a key and detailed aspect of the storytelling process. This project is my pride and joy.”