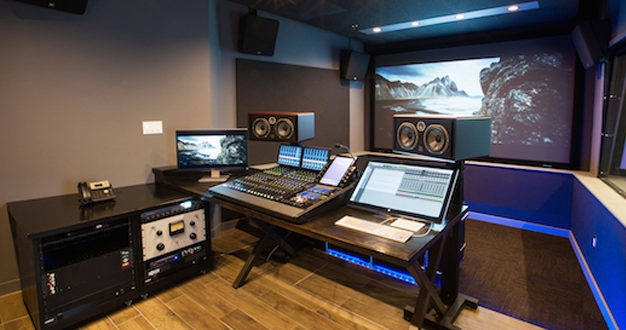 The long-term vision of triple Emmy-winning editor Oliver Lief, Blue Table Post was designed to support his creative talents as well as those of Emmy-winning recording mixer/sound designer Rich Cutler and a team of colourist/vfx artists. Situated on the ground and lower floors of a renovated five story building in Brooklyn’s Boerum Hill neighborhood, the facility is a collaboration between WSDG and architects Craig Shillito, Bob Kellner and Chris Ithurburn.

The first project in the door was Michelle Obama’s CNN We Will Rise documentary directed by Tony Gerber and featuring Meryl Streep, for which Blue Table handled all of the editing and sound-mixing, along with colour grading, graphics and vfx.

To ensure a fully soundproof environment for the 3D Dolby Atmos mix room, the original shallow cellar was excavated six feet to establish a spacious 250 sq. ft. screening room. The mix room is outfitted with an Avid S6 M-40 console and 20 speakers including two Focal Twin Be-6 nearfield monitors and six ceiling-mounted JBL 8350’s, a 5ft x 9ft screen and a full complement of high-end analogue gear for VO recording in the 50 sq. ft. iso booth.

All Avid systems are linked through Ardis Technologies’ DDP SAN, while the suite is piloted by Rich Cutler, a veteran sound mixer/designer with 30+ years of feature film, TV series and commercial credits.

“We were fortunate to have been retained early on in the design stage in 2012, and construction began in 2014,” reported WSDG PM, Romina Larregina. “The 6ft basement excavation provided us with an extremely effective isolation environment, and we stipulated room-within-room construction throughout the complex. Visual contact between the VO Booth and the Mixing/Screening Room is outstanding, and Oliver Lief tells us Meryl Streep was delighted with the studio’s comfort level and functionality.”

“We are all delighted with the way Blue Table Post turned out,” Oliver Lief added. “WSDG partner/project manager Romina Larregina is a consummate pro and detail-oriented to the highest degree, providing outstanding input and follow through from start to finish. We’ve got a bright, modern, comfortable, and efficient environment, and how many NYC post houses have a fireplace and their own terraced garden? The fact that we’re a 15-minute subway ride from Greenwich Village doesn’t hurt either.”