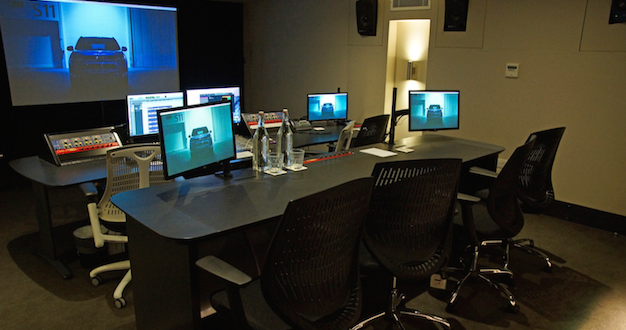 After spending around half a million pounds upgrading its facilities over the last year alone, SNK Studios is now ready to put its brand new audio suite to the test. Colby Ramsey reveals how the Dolby Atmos-equipped space is giving the London-based studios a head start in 2017.

As a new year dawns on the pro-audio industry, finishing touches are being made to a new 500 sqft reception space, new production offices, and cutting edge Dolby Atmos room at SNK Studios’ London HQ.

Over the last year, the team have worked tirelessly with the designers and acousticians at Miloco Builds to create a refurbished space capable of handling the latest developments in cinema and VR, with a full 5.1 and 7.1 commercials and trailers certification.

With a massive 360° speaker array from ADAM Audio, Studio 7 is the first Dolby Atmos room in London relying on a full complement of sound systems from the Berlin-based manufacturer. The open layout also makes the suite ideal for ADR recording and dubbing of long-form work.

The company emerged from humble beginnings after being formed by studio director Seb Juviler and his business partner in 2003. The pair, who already had a sound engineering and music production background, initially made use of a small one-room setup close to Ealing Studios, undertaking audio post and sound design as well as mixing voiceovers and music for commercials. Since then, the company has grown rather significantly, yet its core has remained the same.

“Audio post has been our bread and butter for the last five years, along with some bespoke music composition for commercials,” explains Juviler. “It’s always been stereo and 5.1, so the logical next step was to be able to provide Dolby cinema mixes in the form of 7.1 and Atmos – that’s where studio 7 comes in.”

With over 40 people now at the company, a new office in New York, and this recent refurbishment, SNK Studios has positioned itself as a full service audio post house capable of serving a number of markets. “We’re doing a lot work with big international brands and clients now which is super exciting,” Juviler remarks.

From the start, the SNK team were heavily motivated by their desire to provide end-to-end mixing for all their projects. While a lot of adverts worked on there over the years have ended up in cinemas, they had historically been unable to provide that final Dolby certification, and instead had to rely on other facilities to put the final piece in the puzzle.

Studio 7 now allows SNK to provide the whole mixing service however – which is at its core – and also reflects some exciting technological possibilities with the ongoing emergence of VR recording, as Juviler suggests: “We’ve done a lot of binaural and 3D over the years for ads and installations, but a suite like this gives us an incredible pallet to produce VR audio.

“It is obviously something that the industry is paying a lot of attention to at the moment and so we’re making sure, to use a bit of a cliché, that we’re future-proofing ourselves,” he says. It was important to do so hastily too, as the SNK team already had sessions penned in for the first week of the year, with a plan to bring it all together in time for this. “I’d like to thank Miloco Builds for their skill and handling of the schedule over the last six months,” Juviler adds.

Once the design was approved, the construction of the new suite went swimmingly, yet the design process proved somewhat difficult due to the nature of the building itself. The SNK team worked with Miloco once again to translate their ideal layout into the room’s physical form, also acting as the middle-man between Dolby and ADAM Audio to balance all of the elements together, ultimately delivering something that is comfortable for working with clients, yet still conforms technically.

Despite being a good shaped room with a high ceiling, the team had to install a new air con system, carry out extensive structural work to the floor, and tinker with sightlines to maximise space. Then there was the intricacies of meeting all the Dolby specs, choosing where to house the units, meeting the right object rendering specifications, and placing the speakers correctly to hit the optimum listening angles.

“The room really is three dimensional from the ground up,” says Juviler. “It reflects our smooth collaboration with the other companies that were involved: Miloco, Dolby, ADAM and Jigsaw24, who provided all of the new gear.”

While Miloco was responsible for the building and wiring, Juviler praises reseller Jigsaw24 as ‘fantastic’ in carrying out all the equipment installation – especially the BSS and Dante networking – to deliver exactly what SNK needed for a truly multi-purpose room. “There was 10 to 20 people involved from start to finish, all communicating perfectly at the right stages and getting everything done on time, which was quite phenomenal,” Juviler notes.

At the core of the room is a Pro Tools HDX2 rig with Focusrite RedNet hardware interfaces on the front. Handling all the monitoring and routing for the Dolby Atmos element through Dante is a BSS Soundweb London signal processor, which pipes everything out through ADAM S3X and S2X speakers.

The room contains 19 speakers in total, including two Sub15s – also from ADAM Audio. “We had to modify some of the speakers as part of the build, to get them into the walls and ceilings for the overheads, which was really interesting,” explains Juviler. “It’s a combination of actives and passives. In order to get the space we needed, we’ve got a whole rack of passive amps feeding half the speakers in there.”

Besides serving as a Dolby Atmos, cinema and stereo mixing room, Studio 7 also doubles up as an ADR space, with all its equipment housed in a separate machine room to ensure the complete silence needed for this type of work. With four headphone ports around the room, individual mixes can be communicated to individual actors. A two-metre-wide projector – which is bulbless to further reduce noise – also beams onto the front wall to facilitate ADR recording, and with a whole host of different lav mics at their disposal, including Sanken Cos 11s, Neumann U87s, and Sennheiser 416s and MKH60s, the SNK team are unlikely to exhaust their recording options anytime soon.

“We have an incredibly talented team here all with great technical backgrounds,” notes Juviler. “We’re just on the edge of Soho but are still perfectly placed with three nearby tube stations and numerous creative agencies just around the corner, so this lets us be a bit more nimble and a bit more competitive in serving our very loyal client base with whom we’ve maintained good relationships for many years.”

Juviler, who rightly remains optimistic for the future, concludes: “There’s some great jobs in the pipeline, so 2017 is really about enjoying this amazing space and cracking on with some work. Our group of companies as a whole is growing all the time and the creative department are doing really exciting things, so its our job as production to really make sure its all coming together and working well.”