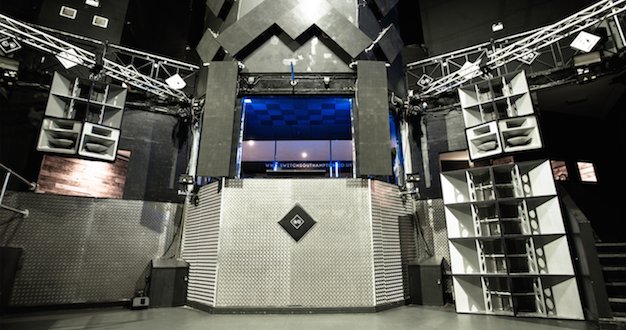 Located in the centre of Southampton, UK, Switch is a 1,200-capacity nightclub that is now home to a new Funktion-One loudspeaker system from Audio Feed, which has been projection mapped for added visual appeal.

Switch is the brainchild of Gary Bennetton, Richard Gilbert, Ryan Keary and Peter Toland – a quartet connected by a shared passion for good music, as Bennetton explains: “We had seen the music scene in Southampton evolving over a number of years and had been trying to cater for a more production and music-led audience by hosting a number of warehouse parties in the city. The demand for this grew and grew to a point that we knew we needed to take it to the next level. We opened our own venue so we could then create an immersive dance music space. Having our own venue and permanent installations was the only way we could take things to the next level.”

Getting the right sound system was a key requisite from the very beginning. “We wanted the best, nothing less,” Bennetton continues. So they contacted Oz Jefferies at Audio Feed about designing a Funktion-One sound system.

“The building we have is an extremely old building with high ceilings and an auditorium feel about it,” notes Gilbert. “We knew that filling the space was going to be no small task and wanted to make sure the acoustics worked in the room. Whilst immersing the dancefloor with audio we also wanted to make an impact not to be forgotten. Funktion-One was the best option.”

Jefferies and his team installed flown arrangements of two Funktion-One Evo 6EH speakers together with two F215 Mk2 bass speakers on both sides of the stage area. The Evo 6EH is the mid-high section of an Evo 6 enclosed in a neat birch ply cabinet, offering high output and controlled directivity. Eight Funktion-One F121 bass enclosures are ground-stacked on one side and eight F101 compact loudspeakers have been deployed for infill reinforcement in the peripheral areas.

Audio Feed and Funktion-One proved to be a winning combination, according to Bennetton. “Oz at Audio Feed is truly part of the Switch family,” he says. “They’re one of the key partners we work alongside to ensure that excellence is achieved. Whether it’s securing the latest kit, redesigning the speaker set up, or providing equipment for a last minute DJ tech rider, there’s no job too big or small. We can always rely on Audio Feed.”

Gilbert adds: “The Funktion-One sound system not only sounds incredible but adds the subtle visual impact through its great design. Since flying the mid and tops this September, the sound throughout the whole, large Switch dancefloor stepped up yet another level. It’s something that we are continually complimented on.”

The recent implementation of XTA APA amps also helped the sound system reach new levels. “This Saturday saw the installation of the new XTA APA amplifiers in the club. It was amazing," states Gilbert. "When customers with no experience in the industry notice the difference without being prompted, you know that the impact has been serious. The new amps offer improvements to the volume, clarity and definition – we’re over the moon with the results. You can really feel the music on the dancefloor.”

The owners also decided to bring in an extra visual element, as Bennetton explains: “Projection mapping is something we have always been interested in and hoped to have as an integral part of the production set up. Once we saw it being used to specifically map the Funktion-One sound system, we all agreed that we had to have it. It’s a great way to bring people’s attention to the install and add visual creativity to our set up.”

Since opening, Switch has welcomed an impressive line-up of guests, such as Fat Boy Slim, Jamie Jones, Snoop Dogg and Eats Everything. Jefferies believes the venue will go from strength to strength: “Switch’s owners aren’t just interested in running a nightclub, they care passionately about the important elements that make a night out at Switch an unforgettable experience. I’m very proud of the work we’ve done with them and of how well the sound system is performing.”

Switch looks set for a big year, with bookings for 2017 including DJs Sven Vath, Kolsch, Joris Voorn, Jamie Jones, as well as brands like Space and Elrow.