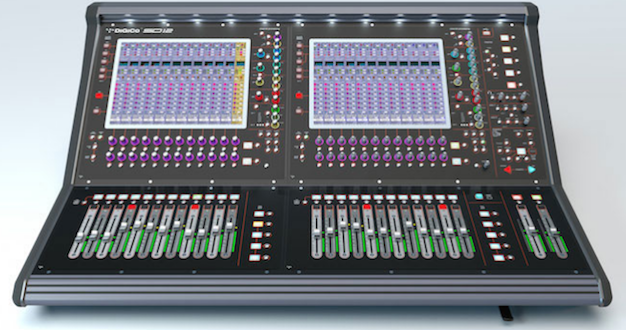 Digico is at the NAMM Show this year to celebrate its 15th anniversary and unveil the new SD12 console, which it calls ‘the culmination of everything that Digico has learned over the last decade and a half and encapsulates the best features of both the SD and S Series.’

Designed to be both compact and powerful, and utilising the latest generation of the company’s Super FPGA technology, the SD12 features 72 input channels, 36 aux/group busses, a 12 x 8 matrix, LR/LCR buss – all with full processing – along with 12 stereo FX units, 16 Graphic EQs, 119 Dynamic EQs, 119 multiband compressors and 119 DiGi-TuBes,12 Control Groups (VCA) and SD Series Stealth Core 2 software, making it compatible with all other SD Series sessions.

The SD12 features dual 15in digital touchscreens – previously only seen on the SD7 and SD5 – which provide 24 channels in one view, dual operator mode and the ability for the right-hand screen to be the Master, as well as advanced connectivity via optional DMI cards, yet the SD12 still maintains a workflow that the firm says will be familiar to anyone working in live touring, corporate, installation, House of Worship, theatre or broadcast.

EQ and dynamics controls are aligned next to both the left and right-hand screens, so that they sit adjacent to the graphic representation when an EQ is assigned, and Digico has also included its Hidden Til Lit (HTL) technology, with two banks of 24 encoders featuring an RGB HTL ring, as well as an SD7-style channel strip with HTL EQ encoders. There is also new Dynamics metering on the channel strip and new high intensity meters associated with the faders.

There is also an assignable Master section on the bottom right hand side of the worksurface and two assignable faders with their own displays and metering, which can be assigned to be any of the channels whether input or output, or Solo Master controls. Dedicated RGB scribble strips – of which there are five – can be assigned to Macros with five banks giving a total of 25 Macros, and there is a Snapshot panel for quickly accessing and controlling the Snapshots list, as well as for firing the next and previous Snapshot.

On the back there are eight local mic/line inputs, eight local line outputs and eight AES/EBU in/out for local digital sources, as well as two MADI ports, plus a UB MADI connection for recording at 48kHz; 48 tracks of recording are possible with the console clocking at 48kHz and 24 tracks if it is clocking at 96kHz.

There are two slots for DMI cards. Options include a Dante module, which can be plugged straight into the back of the console, alleviating the need to purchase an Orange Box. A Waves module can also be fitted to take full advantage of the SoundGrid platform.

And, because the SD12 is an SD Series product, there is also the option to upgrade straight into the Optocore network with not one, but two loop options, allowing the SD12 to sit happily anywhere on a loop with any other Optocore enabled SD product.