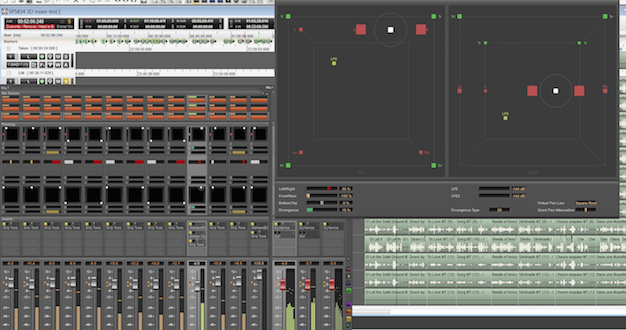 David Bowles gets his head around the latest update for Merging Technologies’ highly versatile DAW, which now offers 3D panning and much more besides.

I moved over to Pyramix version 9 in late 2014, as development had stopped on the DAW I used for years. As with all DAW software, it took some getting used to Merging-named terms and procedures – almost like learning a dialect. Pyramix is loaded with features, and often there is more than one way to go about accomplishing a given task. A Canadian colleague put it to me succinctly: “Pyramix is very much what I call the stretch pants of DAWs.” After working with version 9, I anticipated version 10 eagerly, as it would introduce integrated 3D mixing tools without having to resort to DSP-intensive (and often buggy) third-party plugins.

For this review, I shall concentrate on Merging’s new audio features. Pyramix 10.1 is exclusively 64-bit, running on 64-bit versions of Windows 7 and 8.1. Only 64-bit VST plugins are supported (unless the third-party jBridge ‘translator’ is used for legacy 32-bit VSTs). However, Waves 32-bit plugins will not work even when using jBridge; the user will need to upgrade to 64-bit versions. This also means that Merging’s legacy 32-bit Mykerinos processing cards will not work with Pyramix 10.1 (at this point there are many audio interfaces with ASIO drivers, in addition to Merging’s two Ravenna-based interfaces). Also new are improvements in archiving metadata, mixdown, album publishing and choices of sample rate conversion (SRC) algorithms. The latest version is 10.1.4 build 31117.

The biggest change between version 9 and 10.1 is the integration of 3D mix busses and 3D panning. Merging continues its tradition of integrating features that use DSP efficiently, as well as offering flexible functionality. The new type of mix bus is now named General, which supports a variety of speaker arrays, including those with height and depth layers. The range of speaker arrays is impressive, ranging from stereo and surround through Dolby Atmos, Auro-3D, DTS Neo:X, up to NHK 22.2. Unique to Pyramix is the ability to create one’s own custom speaker outputs – a distinct advantage for sound installations with non-standard numbers of speakers. As with previous versions of their mixer, all controls can be collapsed and expanded.

The user can then add Panning Control Busses (see main image), which are separate elements from the General mix busses. This is a slightly confusing paradigm at first, but one which makes more sense later on. At first glance, graphics in the new mixer strips look rudimentary, until the user expands the view by control-clicking on the pan bus graphic. A large window pops up, with a 3D virtual room viewed from the “top” (centre of ceiling) and “back” (centre of rear wall). Graphics for the speaker array in question are colour-coded. These graphics grow larger as level to a particular speaker is increased. The Panning Control Bus introduces two new features to stereo bussing: width divergence for mono sources, and the ability to add LFE level from individual strips (i.e., for 2.1 monitoring).

For surround control, 2D panning, divergence and LFE level are retained from previous versions, but with the new graphics. Where the Panning Control Bus excels is the 3D panning for height mixes. Values can be controlled by a slider, or by typing in a percentage value in numbers. In both collapsed and expanded views in the mixer strip, a small slider controls these values roughly; I suggest using the “big” window for precision.

Mix busses were also redesigned in order to accommodate more object types (i.e., track types and speaker layouts). The user can configure up to 32 track types for each mixer strip (not including the option “None”!); this can be done when setting up mixer strips or after the fact. Assigning a strip type ensures that audio is routed correctly in a given mix bus; this has saved me many a headache. The user can also convert older mix busses, now called “Legacy”, to the newer General type. One caution: the graphic representation of these busses looks the same. I would suggest saving projects in the 10.1 format with a consistent moniker to avoid confusion later on.

As I mentioned at the top of the article, there can be multiple methods to accomplish a given task. One way to create stereo, surround and 3D mixes is to create separate mix busses. An external monitor controller can then be used to switch outputs between mixes, then the user can create files via the Mix Down feature. However, there is another method to create separate downmixes for various speaker configurations without needing all those outputs: Merging’s completely re-designed Monitor Section. As with the Panning Bus, one can direct high-channel speaker output to a speaker set with lower channel count. This is very useful for checking downmix compatibility quickly. Speaker icons “grow” as output level increases, and turn red to indicate overload – an excellent feature!

Under the Configure tab (above), there are non-editable presets for downmixing from high channel count speaker arrays, plus editable output delays in 0.10ms intervals. However, these presets can be copied, edited and saved under different names for custom configurations. There is also an input patch tab for recording a multitrack mix to Pyramix in real time.

Clicking on an output bus in the I/O & VCA section of the mixer brings up the new 3D Room Editor window (pictured, below). Again one sees the top and back views of the output speaker layout, with two windows below that. Speaker layouts default to a “virtual room”, which corresponds to a channel-based 3D system such as Auro-3D and NHK 22.2. A “sized room” can be created by pressing a radio button on the lower right hand window, and then entering dimensions in metres. The lower left window now shows speaker coordinates: X/Y/Z placement, gain and routing. Speaker locations within the sized room can also be tweaked as well. Custom room sizes and speaker layouts (such as cinemas and sound installations) can be created, saved and recalled. This is more applicable to object-based formats such as Dolby Atmos and DTS Neo:X.

Mono sources can be panned left-right, front-rear, bottom-top and have 1D, 2D and 3D divergence applied. In sized rooms, pan attenuation can be applied to exaggerate or reduce apparent distance (imagine how well that would work with VR effects!). With stereo sources, rotation is introduced: horizontal left-right, vertical left-right and vertical front-back. For even more variety, a “dual-pan” mode can be invoked whereby the two source channels are dealt with as separate elements.

Pyramix 10.1 is not certified for use with Windows 10, though Microsoft’s Anniversary Update has been available for a few months. Quad-core Kaby Lake processors will start appearing in laptops and desktops during 2017; however, these systems will not support Windows 8.1 or 7. Therefore, Windows 10-compatibility will be a requirement. On my current laptop, some plugins seem to use much more DSP in Pyramix than in ProTools 12, and there are also random “spikes” in DSP use which don’t correspond to processing or recording activities. Perhaps this will be solved by Windows 10 and Kaby Lake – these are rumoured to run cooler and quieter than current Skylake models.

I would like to see an automated process to convert mix busses from Legacy to General (offering as well to save the project under a different name, as the version 10.1 format is not compatible with older projects). Defaults are saved in several different locations, but some options are saved with each project instead. Some choices in the Mixdown window are not saved, but corresponding choices are saved in the CD/SACD generation window. There is no way to search for peak level in non-real time (with overloads beyond a given level listed). At the moment, the handy Final Check Metering tool works only with stereo and surround busses: it would certainly need to operate in non-real time with 3D audio mixes. Finally, my preferred audio restoration tool is iZotope RX5; if this were integrated into Pyramix as well as the expensive reNOVAtor I would be a very happy engineer.

Since I switched over to Pyramix, the user interface has remained consistent and the software has worked extremely well for recording sessions and post-production alike. The Fade Editor is quick and efficient, and it’s easy to deliver digital release files in multiple resolutions and channel counts. I’ve always been impressed by the audio transparency of Pyramix’s mix engine, and this tradition continues with version 10.1’s new bussing and 3D panning. I was able to use version 10.1 in the same manner as version 9 almost immediately, learning the new features in my spare time. However, the 3D Room Editor is well worth studying thoroughly before using it in a time-sensitive project.